1. Random variation on the amount of balls thrown.

2. Shields was lucky to walk fewer batters in the past.

3. A combination of the above.

I have no way of proving 1's validity other than saying look at the numbers and tell me how he could throw less balls and still walk more. If Shields threw 100 pitches, 34 were balls, and faced 27 batters, that's an average of a little over one ball per batter. You would suspect he walked nobody. If I told you he walked two, then you would realize eight balls were thrown against two batters. That means the other 25 batters saw 26 balls. The sum of balls remains the same, the allocation differs. That's explanation number one, but again I can't explain it.

Number two is interesting. Shields really isn't walking that many batters. His ball percentage is equal to pitchers like Josh Johnson, Dallas Braden, CC Sabathia, Randy Johnson, Josh Beckett, and Zach Duke. He walks less than Duke, Sabathia, Beckett, R. Johnson, Braden, and slightly more than J. Johnson. A ridiculously crude way of measuring whether he's in the expected ballpark, but this seems to point to number one.  To sure things up a bit I ran the correlation on ball% and uBB%: 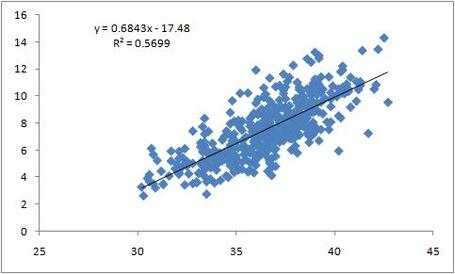 So there's a decent correlation there. It makes sense on the edges and there's mixed result in the middle. Obviously it makes intuitive sense: throw more balls, walk more batters.

Shields walking more might be a form of regression to the mean. Not the league average (although it is 8% for starters),  but the mean of pitchers in which he shares common traits - in this case a similar proportion of balls thrown. Is this the absolute final word on what Shields will regress to? No - after all I'm not trying to choose the correct prior here - but it goes back to point one. Without studying the breakdown of balls thrown as anything more than a ratio of total pitches thrown - and lacking the knowledge whether it was a strategic decision to throw the pitch outside of the strike zone or not - we have to assume the increase in walks is simply random variation or regression.

I also wanted to address Shields' decline in strikeouts. Referring to another post by Jeff Sullivan, he found that change-ups thrown have a negative correlation with the difference in expected and real strikeout rates. Meaning pitchers who throw a ton of change-ups seem to underperform their expected strikeout rate. I don't have a theory as to why, but that's that.

The data for those wondering (from StatCorner):