Share All sharing options for: Cheer for Not-Boston Tonight

So the Rays entered this series four back of Boston and depending on what happens at Fenway tonight, could close the series with the same gap.  I suppose the good news is the three-game gap to Texas is now only two, but in the long run that means next to nothing. With 39 games remaining and 3-4 games to make up, times are still tough.  The Rays have six more games to play against Boston, with half coming at home, and three on the road against Texas. I suppose many are going to write that the Rays control their own destiny, but that's silly because nobody controls their own destiny, and it's not like Boston/Texas has no say in whether they'll compete in those games.

Simply put, the Rays aren't a very good road team this year. They win a little less than the average American League team (42% vs. 45%) and with 21 road games remaining this could prove tedious. If you assume the Rays true talent level is at 54.5% -- as they've played up this point - and then you assume the same for Boston and Texas, you end up with something looking like this: 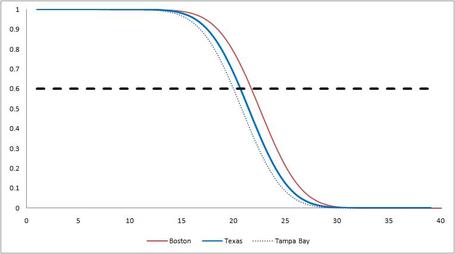 The graph represents each team's chances at winning x number of games.  The black dotted line is the 60% mark, meaning you would expect the Rays to win a little over 20 of their 39 games. Of course if you simply multiplied .545 and 39 you would 21 which is the .5 mark. So what's the purpose of this chart? To show you the expectations of the Rays winning x games, which in conjunction with the expected wins of our two top rivals at the moment, gives you perspective on the likelihood (or unlikelihood) of reaching the playoffs.

If you do the Win% * Games Remaining trick you get 23 wins for Boston, 22 for Texas, and 21 for the Rays. That means the Rays have to win 23 + either 3 or 4 based on tonight's result. 26/39 = .667.  Per the binomial distribution, the Rays have a 4.4% shot at winning 26 games, and that's simply to tie Boston. This is a simpleton approach to forecasting because not every Tampa/Texas/Boston result will be independent of each other due to the head-to-head match-ups and these are not clear cut playoff chances, we have higher than ~4% chances at the playoffs right now, but this is simply for easy reference if you believe the Rays performance to date is true talent level - which I could argue that the Rays are better than their record indicates, but that's for another time and at the moment I have neither the desire or time to get into that argument.

Here's a table for easy reference:

Again, use this by estimating the amount of wins the Rays will need to make the playoffs, match-up the win totals, and that's your likelihood. Also, these are rounded to three numbers, so don't freak out about how there's not zero chance of winning 32 games.