The Rays are undefeated since trading Scott Kazmir,

Less than 24 hours after trading away the left handed starter, the other left handed starter for the Rays went to work. I'm sure David Price missed playing catch with Scott Kazmir before today's game, but that didn't stop him from going out and pitching arguably his best game of the season. Price went a career high 7.1 innings allowing one run (thanks Dan Wheeler) on five hits and a walk. Despite getting only a hand full out swinging strikes, he struck out four batters. Oh he also won on the road for the first since...ever.

Price did most of his work with fastballs. He threw a combined 89 fastballs (76 four-seam, 13 two-seam) in 106 pitches (84%). When Price went to something other than the heat, he chose to go to the change up (12 times) more often than his slider (5 times). Without many strikeouts, Price did a fantastic job of getting ground balls today. Half of the 22 outs Price registered came via the ground ball. Price also did a nice job of working the first base side of the plate (inside to lefties, outside to righties). Just take a look at how he worked this afternoon against right handed batters... 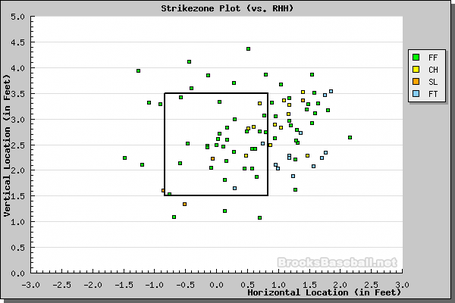 Here are the results of the at-bats against righties... 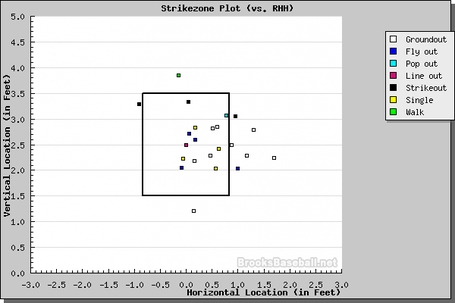 There's nine of the 11 ground ball outs on pitches low and/or away to righties.

After scoring just two runs last night, Joe Maddon decided to switch things up in his lineup. With the return of Akinori Iwamura, Ben Zobrist was shifted to the outfield. However, instead of taking his presumed spot in right field, Zobrist started in center field for just the third time this season and promptly went 0-5. Maddon decided to give B.J. Upton the day off because he felt Upton was pressing at the plate. There's a chance Upton could also sit tomorrow.

That wasn't the only shake up, as the Rays shifted the middle of order. After batting 3rd or 4th for most of the season, Evan Longoria was moved down to sixth in the lineup thanks to his most recent skid. As is the case with most batting order shuffles, it seemed to have little impact. The Rays scored two runs over the first eight innings before adding one more in the ninth. Thanks to the Tigers defense, two of the three runs were unearned. Pat Burrell batted clean up and reached base four times despite just one hit. Iwamura, making his return after missing 81 games, went 1-2 with two walks and two runs scored. Good to see Aki back out there. Also good to see J.P. Howell getting chilly in Detroit. Six pitches, three up, three down; J.P. In, Game Chilled.

Chances of making the post season are still long, but go Minnesota and Toronto.