Share All sharing options for: The Jeff Niemann Pitchfx Analysis (Part One)

Let's start with the pitch surveying this time.

Analysis after the jump.

Let's look at the obvious: Niemann's fastball misses few bats. Despite the impressive top-end velocity, the fine average velocity, and the mix of two and four-seamers (more on that later) it's an extremely hittable pitch. You may be asking "Well how hittable is it?" I think if you polled most people on which Rays starter had the most hittable fastballs, 97% would say Andy Sonnanstine, 2% don't watch baseball, and the other 1% consists of non-conformists. Sonnanstine has thrown 731 fastballs (cutters, two/four seamers, so on) and 43 resulted in swings and misses.

This year Sonnanstine's fastballs are less hittable than Jeff Niemann's. Perhaps I'm focusing on velocity too much, but something is wrong when a right-handed pitcher who tops out at 89 MPH is getting more whiffs than someone with a fastball that licks 95. To Niemann's credit, his fastball whiff rate is getting progressively better. In his last five appearances 20 whiffs have been generated; only 34 were caused in the 15 prior.

I would love to tell you the breakdown by fastball type, especially by seams, but identifying two and four seamers with Niemann is a chore. Here's a look at his fastballs with the supposed two-seamers circled: 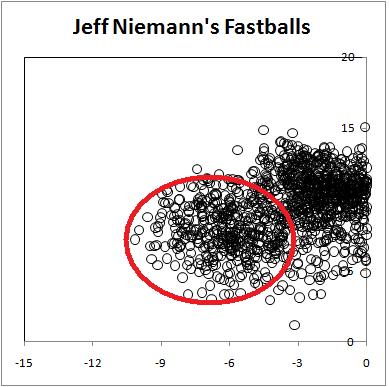 Maybe some other day for that aspect...

The good news is Niemann's other pitches are all pretty good. Please continue to throw them more.