Is Scott Kazmir Returning To Form? A Look At Pitch Location & Selection

Share All sharing options for: Is Scott Kazmir Returning To Form? A Look At Pitch Location & Selection

A lot has been said of Scott Kazmir's changes and performance since returning from the DL and working with Rick Peterson. Kaz's post DL/Peterson numbers aren't quite the numbers he put up in 2006, howver he has been more efficient and hopefully the results will follow.

Kaz has slightly more K's, a lot less walks and nearly two pitches less per inning. The pitches per inning aren't great, but they never have. Kazmir's OPS against has also dropped nearly 200 points. Since returning from the DL, Kazmir has made seven starts. In five of those starts, he went at least five innings allowing three runs or less. His FIP for those five starts are a 2006-like 3.23. In the two starts that Kaz was roughed up, his FIP was a robust 6.17. So what's the difference? Let us look at the strike zone plots

More on Kazmir's changes after the jump 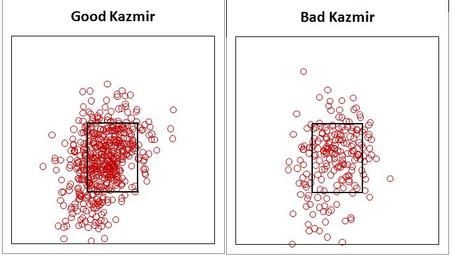 As you can see there is a pretty big difference. When Kaz has been on his game he has been killing the third base side of the plate. This means outside to lefties and inside to righties. You'll notice that there is almost a complete void of pitches in lower right portion of the strike zone. When Kaz stays away from lefties he's at his best. He has also kept the ball a lot lower. On the bad side you can see when Kaz works the first base side he tends to leave the ball up and that is bad.

In the five good starts he has allowed two home runs in 29 innings. He has 23 strikeouts and just seven walks. In the two bad starts he has allowed more home runs (3) and nearly as many walks (5), while striking out nine batters over the 12.1 innings. Small sample sizes, sure, but there seems to be something about the results he's having according to which side of the plate he's pitching too.

There is also a noticeable difference in pitch selection from the two groups of starts (again SSS alert).

Kazmir's last two starts have arguably been his best two starts of the season. In those two starts he's thrown nearly 29% sliders. In his best season, 2006, he averaged 28.6% sliders per start. I'm not ready to proclaim Scott Kazmir back, but if he repeats the things he did in those five good starts, I might be close.