Scott Kazmir Lit Up In Mariners 11-2 Rout Of Rays;

Share All sharing options for: Scott Kazmir Lit Up In Mariners 11-2 Rout Of Rays;

After writing this article earlier in the week, I went into today's start looking at two things from Scott Kazmir: pitch usage and pitch location. After analyzing Kazmir's starts over the last six weeks or so, Kazmir is at his best when he works the third base side, has good control low in the zone, limits his fastball usage and throws around 27-30% sliders. When he's been bad his pitches have been up and towards the first base side. He also relies on his fastball a bit much and sometimes forgets his slider. Look at exhibit's A & B and you can see what kind of start he had today. 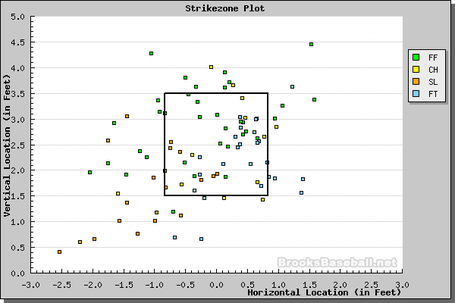 More on the bad Kazmir after the jump...

A lot of fastballs and a lot of them up and over the plate.

It seems that Kaz had good movement on his slider, which moved in to righties and away from lefties, however, he didn't throw it enough and his control was off. His final line of 4.1 IP, 9 H, 7 ER, 2 BB and 3 K's was definitely not what the Rays needed after getting to within 1.5 games of the wildcard and after giving away Friday's game.

There was no press release, but Jeff Bennett has officially assumed Jason Hammel's role as "The Human White Flag." Bennett was signed as a low risk/potential reward player; however, that potential reward is looking less likely with each appearance.

Over and over Kevin Kennedy said that Joe Maddon wasn't giving up on the game, but keeping an eye toward future games. However, when Maddon decided to leave Bennett and his career .864 OPS against the left handed Russell Branyan with the bases loaded, I think that was a sign the game was over. In case you were not convinced, he left Bennett out there for an addition inning as well as scrapping the DH and putting Pat Burrell in left field as a defensive replacement for Carl Crawford; seriously.

Russ Springer made his debut in garbage time and was greeted with back to back base hits before inducing a 4-6-3 double play and a strikeout on a swinging strike. Springer threw mainly fastballs, and at age 40 was pumping 92-93 regularly. He did throw a few pitches classified as sliders although some call it a cutter.

After a 10 run outburst on Saturday, the Rays offense was flat today. The team had another chance to bust the game open early, however, a bad luck liner off Burrell's bat turned bases loaded and one out into an inning ending double play. The Gregg Zaun/Dioner Navarro platoon looked good today as Navi belted a home run off lefty Ryan Rowland-Smith. Other than that...nada.

A day after things were looking so good, the Rays dropped back to 1.5 games behind the Rangers and could go back down 2.5 to the Red Sox. It's been like this all season, so I guess I should've seen a letdown coming. Take your Joe Maddon alloted 30 minutes to sulk on the loss and then it's time to focus on winning 2 out of 3 in Anaheim.