Is Carl Crawford Slowing Down?

Share All sharing options for: Is Carl Crawford Slowing Down?

Fresh off of a two caught stealing night, I decided it was time to check on Carl Crawford's speed. Thanks to Bill James's speed score (via Fan Graphs), we can easily look at what's up with the biggest part of CC's game. For those wondering what speed score is, it's basically to base runners what ISO is to a power hitter. For this version, the metrics used to calculate the score are: Stolen Base Percentage, Frequency of Stolen Base Attempts, Percentage of Triples, and Runs Scored Percentage. Note that the scale is a 0-10 with a speed score of five being average. Michael Bourn has been the league's fastest man this year with an 8.6, while Adam Dunn has the distinction of the slowest at 0.8 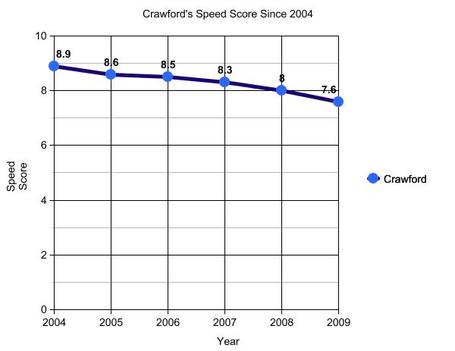 This year has been one of peaks and valleys for Crawford. He started out at a 7.0 in April, but quickly got his legs under him and posted a 9.4 in May. From there he went down to a 4.5 in June before bouncing back to 7.2 in July. Once more, he took a dive in August down to 4.6 before posting a 6.2 so far this month.

While the numbers month to month seem to be pretty inconclusive, one must wonder what the toll of the Tropicana Field turf is really doing to Crawford. Last year Crawford stole just 25 bases and hit a combined 30 extra base hits. This year CC got off to a great start with 27 extra base hits and 44 steals in 51 attempts over the first 88 games. However, in the last 51 games he has 20 extra base hits and just 13 steals in 18 chances.

The biggest concern most of us have with a potential Carl Crawford extension is that his value has always been and always will be tied to his speed. If he maintains his speed like Joey Galloway and Darrell Green were able to do in the NFL, than one would assume that CC will remain at or near the top of his game for years to come. However, if the trend continues, then one day his most valuable asset will fade away and that means the rest of his game, namely defense, will suffer a huge blow.