There are very few things keeping me interested in the 2009 Rays season. One is Evan Longoria's chase for a 30 home run/30 GIDP season. The other two are David Price starts and Wade Davis starts. I'll have a post on Price later today, but WD-Day is quickly becoming my favorite day of the week. After making a memorable seven inning debut against the Tigers, Davis was rudely welcomed to the AL East by the Boston Red Sox in his second start. After that start Davis said there would be better things to come; he did not lie.

In just his third start, Davis tossed a complete game, four-hit shutout against the Baltimore Orioles. It was his first major league win and the first 10 strikeout game of his career. Davis used 124 pitches (80 strikes) to complete the shutout. His previous high pitch count of 111 came as a member of the Durham Bulls. He threw 104 pitches in his MLB debut. The 124 pitches are a season high for a Rays starter. Davis used 23 of those pitches in the first inning as he pulled Houdini and escaped a based loaded no-out situation without surrendering a run. From there it was all Davis all the time.

Once again, he worked mainly off his fastball (72.8%), but mixed in his other pitches well and showed great command of his breaking ball. Scouts have raved about Davis's plus curveball and we are definitely seeing it in the big leagues. He threw 18 curves on the night with 15 of them going for strikes. He averaged a vertical break of nearly seven inches on the curve to go along with a horizontal break of seven inches to the first base side of the plate. Here is a look at the fantastic movement... 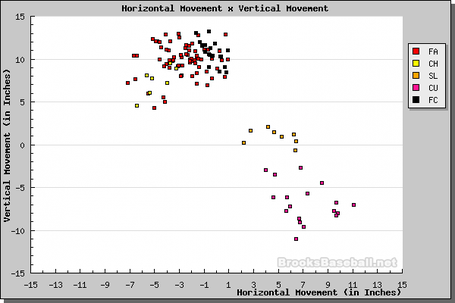 There were a few times that his curve broke nearly 10 inches down and even one that broke at 11 inches. Horizontally, he broke off a curve that moved nearly 12 inches to the right. Amazing.

Davis used his slider when needed, and continues to throw a very pedestrian show-me change-up. However, with his fastball and curve that's all it really needs to be. The 2009 season may be one of disappointment for the Rays, but since being called up from Durham, Mr. Wade Davis has been anything but that.