Did the Rays Bats Get Tired?

Share All sharing options for: Did the Rays Bats Get Tired?

Remember when the Rays had the most runs in either league?  Remember when they were the best offense in the game?  Yeah, it's been awhile since we've seen the dynamic offense that carried our beleaguered staff earlier in the season.  With guys like Longoria, Zobrist, Bartlett, and Crawford getting off to hot starts it was easy to bank on runs in bunches.  We knew they would regress more in line with career numbers, but we figured that other guys like Burrell, Upton, Navarro, and Pena would play up to their historic numbers.  For your viewing pleasure: 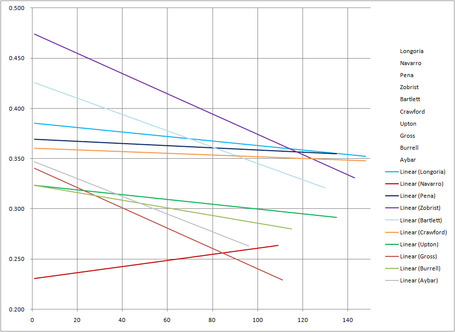 This chart goes to THIS workbook.  A table showing some of the particulars:

The mean is based on the average of each game so it most likely will not line up perfectly with their overall wOBA.  St. Dev. is the Standard Deviation of their game-to-game wOBA.  The larger the number, the more variation from game-to-game.  Slope is the slope of the trendline in the above chart.  As you can see Dioner Navarro was the only player to show a positive slope over the course of the season.  Carl Crawford is virtually flat with Carlos Pena, Evan Longoria, and B. J. Upton playing at a consistent level across the season.

Remember that these are linear trendlines.  The attempt is to create a best fit line between the data points.  The R^2 generally was pretty low, which can be confirmed by the St. Dev.  I offer this so that the reader does not literally interpret the trendlines.  For example, Ben Zobrist was not a .470 wOBA hitter at the beginning of the year while falling off a cliff to be a .335 wOBA hitter in the most recent games.

So my question is, what happened?  Is this a team-wide hot start with regression to the mean over the course of the season?  Did last season's 16 extra games into late-October sap our strength this year?  Is it a lack of focus?  I'd be very interested to hear what you guys (and gals?) think is the reason.