Jeff Niemann is without a doubt the oddest starter on the Rays. He stands a towering 6'9" and weighs somewhere around 280 pounds. Factor in his Texas born and raised lineage and you would fully expect a flamethrower in the mold of Randy Johnson. A record of injury and stress has taken its toll on Niemann's fastball velocity which seemingly sits in the low-90s but has touched the 94-95 range a few times this season. In college he threw with more authority and perhaps less caution.

Niemann's strikeout rates are less Randy Johnson/J.R. Richard and more Chris Young/Mark Hendrickson. That would be the wrong neighborhood for starting pitchers in the land of giants. However, since the all-star break Niemann has seen an increase in strikeouts and a coinciding decrease in walks given. The difference between first and second half Niemann is startling and appears to be two different entities entirely.

In April Niemann nearly went punch-for-punch with opposing batters; striking out 13.3% and walking 11.2%. The difference expanded in May as he posted ratios of 13.2/9.3 but contracted once more in June with figures of 13/10.4. In July Niemann morphed into another being. His strikeout ratio jumped to 17.7% (and was 17% in August and 21.9% thus far in September) and his walk rate lessened to 3.5% (and has since inflated ever so slightly to 5% and 6.1%). These numbers are similar to the ones he produced during two seasons in Durham, as shown here:

So what's going on here?

As previously stated, Niemann has thrown nearly the same amount of pitches in both of our splits which allows us to compare the percentages of pitch types thrown without worrying about the differences in sample sizes. During the first half Niemann threw 72.9% fastballs, 15.7% curves, 7.7% sliders, and 3.6% change-ups. In the second half Niemann has thrown 71.3% fastballs, 15.3% curves, 9.1% sliders, and 4.1% change-ups. There is minimal difference there, at least when you cluster all of the fastball types together. We know from observation that Niemann has began using a splitter during the season, and look at the graph below (which depicts all of Niemann's second half fastballs). You can clearly make out three clusters: A) the four-seamers up and closest to the y-axis, B) the splitters down and furthest from the y-axis, and C) the two-seamers In the middle of the other two. 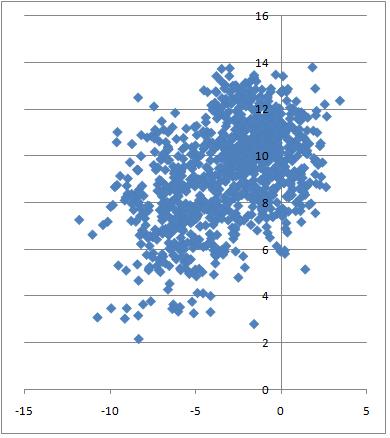 Meanwhile here are his first half fastballs: 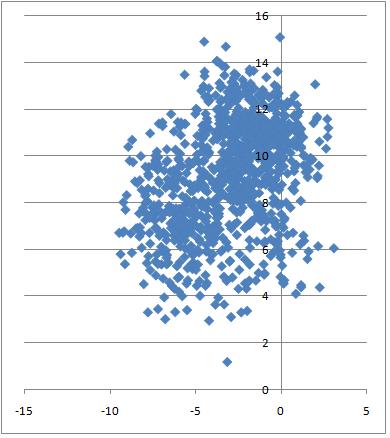 Notice he shift outward? Either Niemann is the world's tallest manifest destiny expert or he switched his pitches up to include more splitters.

Attempting to classify these further is a pain*. However I did discover that 5.2% of Niemann's fastballs are being whiffed at in the second half, which includes his new pitch, meanwhile only 3.6% were generating swinging strikes in the first half. That shift is nothing to sneeze at and while I cannot fully attribute the movement to the split-finger pitch, you have to wonder if the increase in whiffs is temporary or an indication of a newly found plus-pitch.

Hope for the latter.

*Gameday also takes a bit of time to adjust for new pitches in their classification. So it's not as easy as simply checking out the pitched tagged as splitters -- all three of them.