At this point of the season the results of the game do not to matter. We're not catching Boston (or Texas for that matter). Joe Maddon's bullpen usage makes no sense. No lead is safe and it's gone from bad to worse very quickly. With that being said, here's the more important part of today's game.

As a Wade Davis fan, I've waited for his debut for quite sometime now. While Davis is just now making his way to the Majors he's been on the lips and minds of Rays fans for a few seasons now.  His name, more than any other Rays prospect, has come up in multiple trade rumors as well as thoughts of the future. I tried to keep my expectations of his first start low and very cliche. Just keep it simple. Eat up some innings. Keep your team in the game. Well today Wade Davis did all that and then some. Wade Da 5'8 threw 104 pitches in seven innings of one run ball allowing just three hits, one walk while striking out nine and earning his first Major League win. Welcome to the bigs Wade Davis, signed your bullpen.

We've heard ad nauseum about what a competitior Davis is and how much mound presence he has. While all cliche, it was very true today as Davis did not show any signs that he was a pitcher making his Major League debut. He struckout six of the first seven batters he faced and made just one mistake all day; a solo home run to Aubrey Huff. After striking out the side in the first two innings, Davis decided to actually use his fielders and that worked also. In addition to his nine strikeouts, he induced four groundballs and eight flyballs, several of which were infield flies.


Stuff wise, we've heard about Davis's low to mid 90s fastball as well as his curveball. We saw both today and both got results. Davis threw 71 fastballs today with 48 of them going for strikes. The gun on Fox Sports had Davis anywhere between 89 and 95 mph on the day. According to pitch F/X, he averaged 92 mph on the heater and maxed out at 94.4. He had nearly 15 miles per hour of separation between the fastball and his hammer curve which was thrown 13 times. He threw his slider nine times and threw more of a show me change up, which is just fine. We always mention that swinging strikes are a good indicator of how well a pitcher's stuff was on a given day and Wade got 12 swinging strikes; very good.

Here is a visual of the different pitches 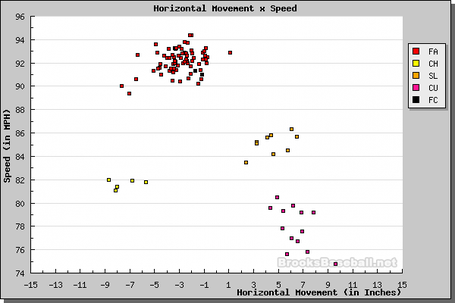 If it wasn't the best debut for a Rays pitcher ever, it certainly ranks among the best. Going forward, I expect to see some bumps along the road from Davis, however, if today was any indication of what we're going to get...oh my; Mid 90's heater, plus curveball, nice slider and a good enough change up to keep hitters honest. And did I mention good control off all four?  A few days ago I asked if Wade Davis was ready for the Rays rotation. Davis seemed to answer that question today and raise the question, is the American League ready for Wade Davis?