Andy Sonnanstine Leaves No One

Share All sharing options for: Andy Sonnanstine Leaves No One

It's not the strong that survive, but the most adaptable. - A paraphrasing of Charles Darwin's theory of evolution.

At its core, pitching is a form of sadism and survival.

Every pitch is an act of disobedience towards the body's natural movement. Every base runner allowed is another to be blamed with. Every tendency studied, every pitch clocked and recorded, and if you have a weakness, it won't be a secret for long. Pitchers must constantly evolve in philosophy and ability to stick in the major leagues. The ones who don't fail to last long.

This brings me to Andy Sonnanstine. Sonnanstine has faced a little under 1,800 batters in his career but possesses a 64% strand rate. League average is generally around 70%. During any given season you would expect that ratio to regress towards the mean unless the pitcher has a history that suggests otherwise. Star pitchers are known to strand a good deal more than average while lesser beings strand fewer runners. This is to say that clutch pitching does exist - Tom Glavine being the poster boy - and tends to be a repeatable skill.

I do not know the exact batters faced total in which we should start looking at this being true talent rather than bad luck, but stuff like this tends to stabilize rather quickly - which is to say it's the anti-BABIP. With such, I decided to look at potential reasons for Sonnanstine's struggles (and this is putting it lightly) with men on for the first time ... well ever.

To the pitchfx cave we go.

I started this research with the idea to look at every single pitch thrown by base state. Needless to say, with 16 starts in my database that became tedious and overwhelming. Instead, I limited the first test to Sonnanstine's start in Oakland. He allowed a plethora of baserunners and was always pitching with his back against the wall.

25 of 79 pitches were made without a runner on. That is an incredibly poor rate. Here's the breakdown by pitch type:

For the 54 with men on, the breakdown is as follows:

Sonnanstine goes from not using his four-seam fastball to using it quite a bit. His cutter is used fewer times relative to total pitches thrown while his curve and slider mor+e. Do these approaches on this day differ in location? 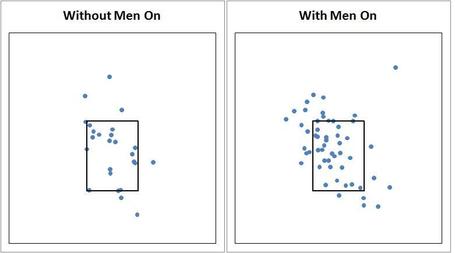 It's hard to say. Sonnanstine appears to be all over the place with men on. How about release points:

Even with the knowledge that Sonnanstine threw a pitch-out, the spread of release points - horizontally - is wider and suffers from more variation. We have a n of one right now, so while it would be easy to say Sonnanstine just isn't comfortable with his release points from the stretch - or perhaps comfortable with his original release point from the stretch and attempts to fool batters by changing things up - it does give us something to look at in other starts, and look at I did.

I randomly sampled three other starts which give us a sample size of one-fourth of Sonnanstine's total starts entering Labor Day. I found that similar tendencies were displayed in each; leading me to question whether Sonnnanstine is making a conscious effort to change his release points, why, and if this potentially causes reduced effectiveness. It's important to note these altered points are inconsistent with the changes Sonnanstine used upon arrival. Those were vertical shifts more so than horizontal. He's essentially sliding along the x-axis

I also wonder, given his improved statistics with men on in the minors this season, if the Rays have attempted to fix this. Minor league pitchfx data is obviously unavailable and I'm not going to put a ton of weight on what is one start back, but this is an interesting quirk, if not entirely telling, of the issues with Sonnanstine's strand rate.

Unfortunately there is little in ways of absolute. Maybe it's his release points, maybe it's his pitch selection, maybe it's something I didn't think of. I'm simply providing something that stuck out in the data I looked at.

Only time will tell if Sonnanstine alters his path from dodo bird to canary.