A Look at Some ISO Comps for Pat the Bat

Share All sharing options for: A Look at Some ISO Comps for Pat the Bat

Pat Burrell was dreadful in 2009. We waited, and we waited, yet the turnaround and adjustments did not come. Did the Bat go limp at the age of 32? Burrell's ISO dropped .111 year/year in his first season with the Rays, finishing at .146. I thought it might be interesting to look at some comparables. This sample set consists of right-handed batters who played in 2005 or later who have an average ISO between the ages of 27 and 31 of .200-.253. The sample set consists of 12 names: Pat Burrell, Vladimer Guerrero, Andruw Jones, Derrek Lee, Carlos Lee, Paul Konerko, Gary Sheffield, Alfonso Soriano, Magglio Ordonez, Jeff Kent, Morgan Ensberg, and Torii Hunter.

Here is a table with the average ISO of the group based on age:

You can see the decline heading into the 30's bottoming out (with help from Ensberg) at 33.

Below is a table with each player's worst ISO (wISO) between the ages of 30-33. The next column over displays the year/year decline, followed by the following season's ISO, and lastly the +/- from the wISO.

Of these players, Ordonez, Andruw Jones, and Derrek Lee match Burrell as players who fizzled the year after signing a big contract.

We will look at the extreme cases of Ensberg and Jones  below, followed by individual graphs of each comp. You can see generally regardless of age, players show the ability to bounce back from random season's with larger than expected decreases in power.

See that orange line falling so hard and fast that its threatening to break the X axis? That's 2009 Rays Spring Training invitee Morgan Ensberg.  This is the situation we desperately need Burrell to avoid. To be fair, Ensberg was considerably more volatile year/year than Burrell. Ensberg had a monster 2005 at the age of 30, posting a wOBA of .395. He followed it up with a bizarre 2006 where he walked 101 times with 91 hits. At the age of 32 his walks  fell to 11.9% and his ISO to .174. At 33, he cracked the X axis in a limited role with the Yankees. No injuries to blame, just washed up young. So let it not be with Pat Burrell. 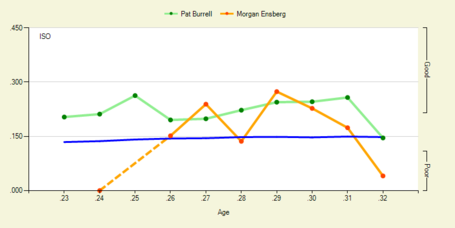 This exercise made me remember that Andruw Jones is not 40. Some guys just seem like they have been around forever. For as much as we don't want Pat Burrell to be the next Morgan Ensberg, the Andruw Jones ISO bounce back would suffice as an endgame to Burrell's time with the Rays. The Braves figured they would lose Andruw Jones after 2007 due to his free agent market value being out of their reach.  It turns out they would simply not want him back after his slash ended up at .222/.311/.414. Jones showed up  twenty pounds overweight the following season wth the Dodgers after signing a 2 year/$36 million deal,  Its hard to believe he was only 3 years removed from posting a UZR in CF of 30. HIs strikeout rate had risen to 36.4% (career 22.4%) and his ISO fell to .091 (career .231). The Rangers took a shot on Jones in 2009 though he remained overweight and a rather large shadow of his former self in centerfield. While his batting average remained putrid at .211, his walks climbed back to 13.8% and his ISO rose back to .246. Jones had a world of talent, but his weight gain may show he does not have his heart in the game. This has been an argument used against Burrell after signing his fat contract, but hopefully a new contract year will lead to improved results. 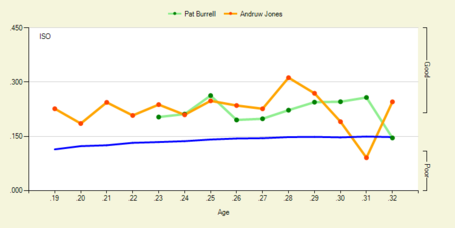 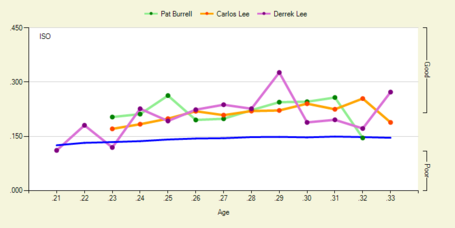 Derrek Lee shows a Burrell like spike in 2006 with two more years of declined power to follow. What did Lee's 2006 have in common with Burrell's 2009? Prior to 2006, Lee inked a 5 year, $65 million deal. As Lee nears his free agency after this season, the power has reemerged. Let's hope the Bat follows the contract path of Derrek Lee. 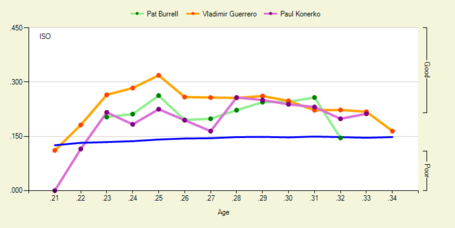 A pair of steady decliners beginning in their 20's. No cliff dive found here like Burrell's 2009. 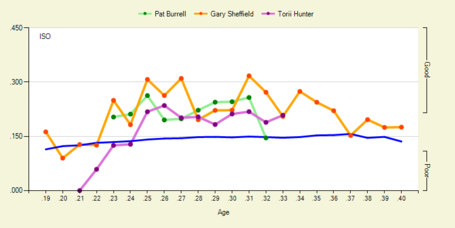 Sheffield's been volatile, but its been between elite and this crop. 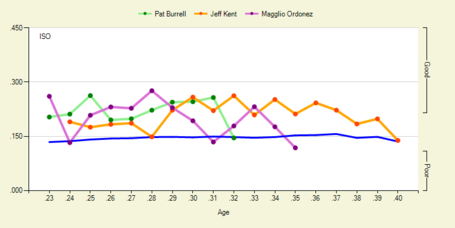 Ordonez's low point at 31 came just after he signed his 5 year, $75 million deal.

Barring an Ensberg-like total evaporation of skill, Pat Burrell should certainly expect to see a bump in 2010. All the players who imploded after payday managed to turn things around near the next time they needed to whip out their John Hancocks. For this we should be grateful that the Rays signed Burrell to just a two-year deal. The age curve tells us not to expect 2008 Burrell, but an ISO around .200 should be within reach.