The Power Play on Carlos Pena

Share All sharing options for: The Power Play on Carlos Pena

(This is a bit experimental and based on a premise that I cannot readily prove, so take it as it is. Also, all data comes courtesy of Baseball-Reference's split page.)

The original question I set out to answer was this: How much did the shift affect Carlos Pena's BABIP? As you may know, Pena homers, walks, and strikes out a lot. That means fewer balls in play and leaves his BABIP susceptible to more extreme fluctuations.

Last season, his BABIP was a career low .253 (his career mark to date is .293 and his Rays' average was .306). I assume that number will regress towards his mean, however, it seemed to me that the opposition employed the pull-heavy shift on him more in 2009 than any other year.In fact, I'm not even sure he was shifted against in 2007 and maybe not until late in 2008. Although, again, I cannot prove this since I have no data or easy way to go back and note shifts. Why is this piece of the puzzle important? Because, take a look at this:

BABIP is the batting average on balls in play. That means home runs are discarded, as are strikeouts. In 2007 and 2008, more than 40% of the balls Pena pulled turned into hits. That percentage nearly halved in 2009. His BABIP on balls hit to the opposite field jumped (albeit in a much smaller scale) as did his BABIP on balls up the middle, but neither accounted for as many balls in play as to off-set the large decrease. 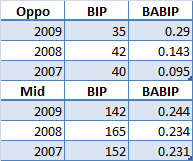 Since we don't know a crucial piece of the equation, I can't say whether this affects his projection going forward or not. Was Pena extremely unlucky when facing the shift, or is the shift just the perfect defense against him? I'm not sure.

The good news is that Pena has two of the best attributes in combating such a power play, in that he can hit the ball where the defense can't field it and he can also reach base without ever putting the ball in play.  There's also pushing a bunt down the third base line, something he's become pretty efficient as he recorded five of his eleven career bunt hits last season, and a total of eight since joining the Rays.