The Cost of a Win Distributions by Salary Range

Share All sharing options for: The Cost of a Win Distributions by Salary Range

Last week I took a look at how the top of the Rays' payroll grossly underperformed the Yankees and the Red Sox's production in 2009 even when scaling for the salaries. Steve Slowinski brainstormed that perhaps there is less variance in production among the most expensive salaries. I decided to put that theory to the test. The first chart we will look at  consists of players making in excess of $2 million in 2009. To qualify, you must have either signed a fair market deal, be in your final year of arbitration, or signed away your cost-controlled years in a long-term deal.

On the free agent market, players typically go for $3-4 million per expected win using Fangraph's WAR. Anything below $3 million/win should be seen as great value, while every increment above $5 million speaks further and further to a bust. For the sake of consolidation, every WAR greater or equal to 0, or players at or below replacement value were lumped in with all players who earned $10 million per win. These players were grossly overpriced. 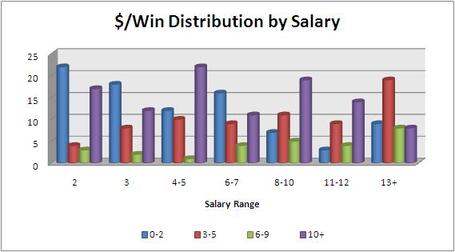 Steve's theory looks pretty good. At the $2 million range, players rarely achieve a normalized level of production of $3-5/Win. It's clearly boom or bust but at a low real cost. In the middle ranges, the expected price for production is increasing, the gross out-performers are decreasing, though the rate of failure remains high. Once the salary range eclipses $13 million, the predictability of the player's production does indeed seem to be on the rise.

We know that the lower cost players' production fluctuates a great deal. Let's focus on the $6 million plus players the rest of the way. Instead of lumping all Major League Baseball players together, we will break them out into positional players, starting pitchers, and the bullpen. First, the starters: 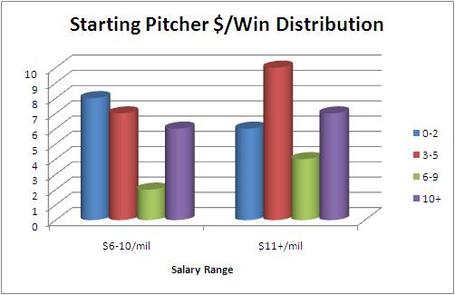 Here's my chance to tie this in with the Rays. The Rays have made it a point to stock the farm system with quality starting pitching. Looking at this chart should give an idea why.  The Rays well-above average rotation (Shields, Garza, Price, Niemann, Davis) will cost a total of about $8.5 million in 2010. Healthy pitchers are fairly predictable. However the issue of health is a major concern for pitchers relative to positional players. The players purple bar  ($10mil+/Win) is largely indicative of players whose seasons were cut well short due to injury. With a limited payroll the Rays are able to reallocate the cost of a $13 million + pitcher into several position players. If one of the Rays quality low cost starters go down, inexpensive Andy Sonnanstine or top prospect Jeremy Hellickson will be able to fill in with a very small drop-off in talent. Now let's turn our attention to the bullpen: 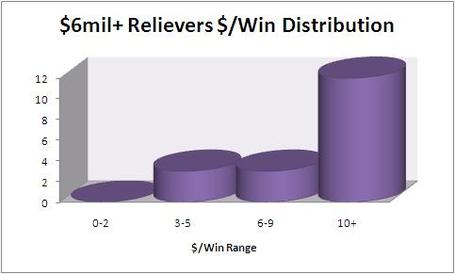 As I commented last week, our best case scenario for $7 million closer Rafael Soriano is to get out of him exactly what the Rays paid for. Sadly, it's far more likely to get much less. This is further proof of how typically it is a poor allocation of assets to dump a lot of money into a closer.  Finally, the position players: 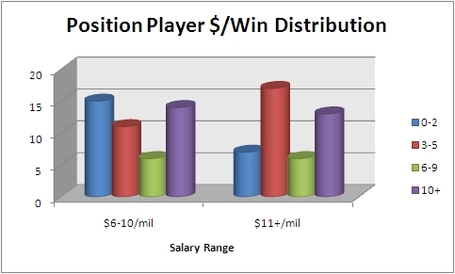 As with starting pitching, there is still a surprisingly large amount of failure. The risk with hitters was more of a decline in production than with injury. The urge to watch your team dump a large sum of money into a particularly player is hard to resist. Watching the Yankee steamroll through the season last year makes it all the more tempting.  The Yanks will be hard pressed to survive 2010 as healthy as they did in 2009 given the age of the team. If the lineup and rotation holds up, they will be pretty unstoppable. The odds seem to be against the likelihood of that occurring.

Finally let's look at the aggregate of each grouping. We achieve this $/Win by adding up the total salary for the group and dividing by the total WAR:

While the findings are interesting, it is important to remember it's just one season of data. With youth and depth on our side, the Rays could be well positioned to survive the war of attrition that is the 162 game season in the AL East.