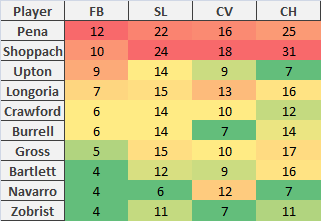 Whiff% by pitch for each Rays' batter

So about a month back I pulled this data with the idea to do a long, drawn-out series with it, perhaps culminating with a larger annual piece. Needless to say, that didn't happen. Rather than waste the chart (and yes, it still includes Gross, deal with it) I want to post truncated bullet points of what the series would've included.