Pardon me as I disqualify things like hurt feelings, perceived hustle, heart, and desire for this exercise. In their place I want to take a look at the potential hearing between Larry Reynolds, B.J. Upton and the Tampa Bay Rays using metrics that we can quantify. I say potential hearing because there is still hope that a multi-year deal can be reached before a hearing. And as we learned this past Monday, B.J. Upton is "definitely" up for such a deal as well. It is no shock the Rays are interested as well.

Looking at this year's arbitration eligible center fielders, I don't see much of a comparison for B.J. Upton. The closest that I, as well as Baseball-reference, could come up with is Melky Cabrera, and that doesn't seem to be very apt. Cabrera, a below average hitter and a slightly above average defender, is quite a step down from Upton. His career .316 wOBA is slightly higher than the career low .310 Upton posted in 2009. He avoided arbitration with his new club, the Atlanta Braves, and signed a one-year contract worth $3.1 million dollars. 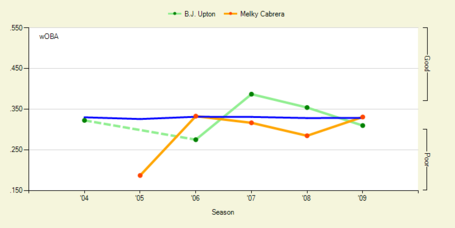 Looking at that comparison, one would say that Upton's request for $3.3 million dollars is beyond fair. Regardless of how this case pans out, the gap between Upton's camp and the Rays is a mere $300k. That said, we thought the same when the Rays went to an arbitration hearing with Kendall Almerico and Dioner Navarro over $400k and we all know what happened (I don't mean Navi got his feelings hurt and tanked). While the Cabrera comp works well for Upton, the Rays are likely to bring up another first-year arbitration eligible centerfielder for their own case

Looking through the first time arbitration candidates from last year, Shane Victorino jumps off the list as a possible comparison. Looking at his numbers through the 2008 campaign,  and his name will almost certainly come up at some point if potential hearing takes place. Victorino went into the last offseason with a career slash line of .281/.342/.421. That's good for an OPS of .763 in over 1.500 plate appearances. Despite being four years younger, Upton heads into his hearing with just under 1,900 plate appearances, but a near identical OPS of .762. Upton's average isn't as shiny as .281, but his debated slash line will be .266/.352/.410. For sabermetric use only, their cumulative wOBA's were nearly identical as well. 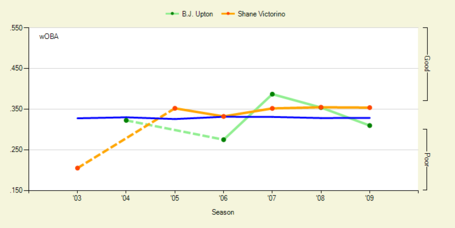 Unfortunately for Upton, sabermetrics nor the fact that he has center field covered like Darrelle Revis will have much merit in an arbitration case. Despite back to back finishes as the American League UZR runner-up in center field, Upton has no hardware in the form of a gold glove to show for those efforts. Victorino, on the other hand, has been largely average in center field and owns a UZR/150 of less than half of Upton's in center field. Nonetheless, the flyin-Hawaiian was considered a gold glove defender in 2008.

The similar offensive numbers as well as the 1:0 gold glove ratio works in the Rays favor. Also working in their favor is the fact that Victorino signed a one-year contract worth $3.125 million last season, or ~$200k less than Upton's request. Sure, he just inked a three-year deal worth over $22 million dollars, but multi-year contract comparisons are a no-no in arbitration arguments.

Andrew Friedman is on record as saying there will be no winners in an arbitration hearing regardless of the outcome. However, looking at the possible arguments that could be made, I'm sure the Rays would go into a hearing with a pretty good feeling that they will leave with $300k in the bank. With the gap being so small, hopefully a Franklin Gutierrez-esque extension can be reached before the finger pointing begins. If not, then Upton, a 25-year-old grown man, understands that business is the name of the game and says he will not take anything personal; spoken like a true malcontent (/sarcasm).