Share All sharing options for: xBABIP Adjusted Lines for Rays Batters in 2009

Thanks to B Ray for posting the link to Chris Dutton's xBABIP calculator.  I wanted to take a look at which guys posted an actual BABIP that was close to or way off from their xBABIP.  As usual, this led me down some other interesting roads to get an idea of which guys over/under performed their expected lines.  First off, here is a link to the google.doc HERE and a link to the .xls download:   xBABIP Corrected Statistics

Let's start by looking at the xBABIP vs. Actual BABIP, sorted by highest xBABIP, for all Rays with >=30 AB:

It makes sense that the guys that you think of as speed guys have the higher xBABIP's, while the inverse is true for some of the slower guys.  I think you can get a good idea of guys that seemed overly lucky (Bartlett, Iwamura) and those that were unlucky (Pena, Navarro, Upton) just by giving the list a quick perusal.  To extend on this, we can assume that the difference between the xBABIP and BABIP times AB should give an idea of how many hits a guy was robbed of or lucked into:

In this case, a negative number implies that the batter was robbed of that many hits, conversely, a positive number shows how many the batter lucked into.  It looks like a lot more of our guys were unlucky than lucky at first glance.  So what does this all mean to some of the basic statistics?  First off, here are the players' actual slash line statistics from 2009:

If we assume that every one of the hits that a player was robbed or lucky on was a single, then we can adjust these to show what each batter should have looked like:

This can be a lot to try to sort through, so lets just take a look at actual wOBA (AwOBA) vs. expected wOBA (XwOBA):

Bear in mind, this is the original formula for wOBA that doesn't include stolen base numbers.  I have omitted ROE as well.

Guys that appear to benefit quite a bit are Carlos Pena, Gabe Kapler, Willy Aybar, Gabe Gross, B.J. Upton, Pat Burrell, and Dioner Navarro.  Guys that seem like they were quite a bit lucky are Jason Bartlett, Gregg Zaun (includes time with Tampa Bay and Baltimore), and Akinori Iwamura.  Weird that 2 of those guys are now gone.  Also, check out Matty Joyce doing a Pujols!  IF ONLY WE ACTUALLY PLAYED HIM11!!!!111 To correct for asinine statements like these that are sure to come, we can look at wRAA, which will factor in PA as well as the league average wOBA of .321:

Suddenly Navi does not look as bad, once we've stripped some of the unluckiness out of his balls in play.  Same can be said for Pena, who now looks like a stud, contributing 4.25 wins with his bat alone.  Another reoccurring theme is the Jason Bartlett normalization.  It suddenly appears that a hot-shot rookie that plays substantially better defense could replicate those runs.  Lastly, we can just look at the difference of the wRAA's as a kind of continuum: 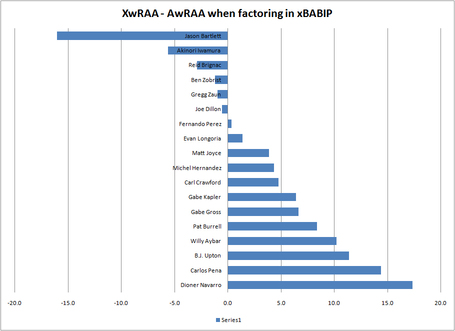 Something that I didn't touch on throughout this was the fact that guys like Crawford, Longoria, and Zobrist a.k.a. THE CORE, were not relatively lucky either way.  They had genuinely good to great seasons according to this.  If this statistic has any predictive value then we can look forward to more of the same next year.  Also, I just realized that I forgot to include Kelly Shoppach, so I will post some of his relevant items in the comments.  Haters wanna hate?

Here are the Kelly Shoppach lines, I apologize for not doing this in the main stuff, but I'm not creating this post all over again.

As you can see, Shopp was quite a bit unlucky in 2009.  Hopefully, he has a big bounce-back as a 0.811 OPS out of the catcher spot could really put this team over the top.