Is The Franklin Gutierrez Extension A Blueprint for B.J. Upton?

Share All sharing options for: Is The Franklin Gutierrez Extension A Blueprint for B.J. Upton?

After our discussion about Evan Longoria, and young players in general, signing pre-arbitration extensions, I started to think about Franklin Gutierrez. Gutierrez, 26, just inked a new four-year contract worth nearly $21 million dollars. The Mariners are buying out all three of his arbitration years and at least one year of free agency. The team holds an option for a fifth year or what would be his second free-agent eligible season.

Much like the comparison I made last year between Matt Garza and the then recently extended, Ubaldo Jimenez, I think that the Gutierrez extension could serve as a blueprint for a extension between the Rays and their own center fielder, B.J. Upton. Allow me to throw out the obligatory disclaimer:

This is just speculation. The Rays hold any and all extension talks very close to the vest . Publicly, there have been no mentions of negotiations on a long-term deal with Upton. I'd also add that Upton, his representation, and his father have expressed no problem with playing on a year-to-year basis; however, this was a few seasons ago.

Upton's injury problems over the past two seasons have been well documented and last season he was below average offensively for the first time since becoming an everyday Major Leaguer in 2007. This could be one of those situations where camp Upton might be more willing to listen than in the past should the Rays offer up some long-term security.

Despite the perception, B.J. Upton is a very valuable member of the Rays. He has been so for the last three years. Even with this offensive freefall in 2009, he was still worth 2.5 WAR thanks to his nifty defense. In 2007 he posted a 3.9 WAR. He had his best season as an overall player in 2008 when he neared the five-win mark.

Franklin Gutierrez has been the antithesis of B.J. Upton. While Upton has declined for various reasons, Gutierrez has improved in each of the last three seasons. He posted back to back ~2 WAR seasons in Cleveland as a part-time player before exploding for a 5.9 WAR as the Seattle Mariners full-time center fielder this past season.

The comparison is far from perfect, but there are enough similarities to discuss. Both players are arbitration eligible for the first time in their careers and both are regarded as above-average center fielders. Despite the similar service time and B.J. having nearly 600 more plate appearances, Upton is exactly 18 months Gutierrez' junior. Defensively, Upton has accumulated nearly 3,500 innings in center field. Gutierrez moved to the position in full-time in 2009, but has racked up over 3, 200 innings in the outfield in his career.

There are few players who play a better center field than Upton; Gutierrez is one of those players. Of course, he has less than half the innings of Upton in center, but Gutierrez is arguably the best defensive outfielder in the game regardless of actual position. He was the winner of the fielding bible this past season for center fielders, while B.J. finished well outside the top 10. Though the fielding bible includes some of the brighter minds around baseball, Torii Hunter finished ninth in this year's vote. I don't care what you say B.J. Upton > Torii Hunter defensively. That being said, after watching Upton for these past two seasons, I see no reason why he couldn't move closer to Gutierrez in seasons to come. 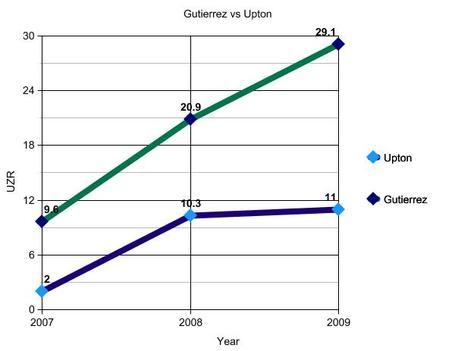 Gutierrez has the edge defensively, but even with a down 2009, I would say Upton has been the better offensive player. In addition, he has more offensive potential going forward. For his career Gutierrez is a below avergage hitter (.323 wOBA). In seasons which he has accumulated at least 300 PA's, his career high in wOBA is .339. Oddly enough that didn't come last season; however, his 2009 .337 wOBA was close.

On the other hand, even with the forgettable 2009 included, Upton's career wOBA is .340. He is just one season removed from .351 wOBA season and just two years from a .387. He is also a superior base-stealer as well as overall better base-runner according to my handy, complimentary copy of the 2010 Bill James Handbook. 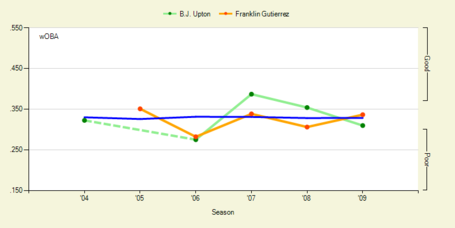 Yes, his wOBA dipped to .310 last season, but even the loudest Upton detractors do not believe he is going to be that bad in "twenty-ten." Not to beat a dead horse, but Upton admitted he never felt 100% in 2009 thanks to a variety of ailments. Even with those injuries we all saw how fantastic Upton's bat was in the 2008 playoffs. And in 2009, his .421 wOBA in June was enough to earn him AL Player of the Month honors. Towards the end of the season we saw some signs from Upton's bat as his wOBA was .339 over the final 30 days. He will enter the 2010 season a full-year plus removed from labrum surgery. He will also participate in Spring Training activities from day one.

Despite one player having the advantage over the other in different ways, as complete players, both Upton and Gutierrez represent above-average center fielders. Honestly, I think if the Rays could lock Upton up for 4yr/$20.5 million they would do so in a heartbeat. Even if Upton never returns to 2007 offensive form, and falls somewhere in the .340-.350 wOBA range, he would challenge the 5 WAR threshold for years to come. Notwithstanding, it takes two sides to tango. And we have no indication that either side has their dancing shoes on.