Wade Davis, Go to the 'Pen!

Share All sharing options for: Wade Davis, Go to the 'Pen!

♫ The playoffs are upon us! ♪

If you didn't just hear angels singing, you have gone deaf or might be a little dead. A short time ago, we stood three games behind the Yankees and two behind the Red Sox (June 29th). Now, we boast the fewest losses in the league and have turned our eyes to the mere second playoff push of franchise's history!

A moment of silence for the Mariners, Cubs, Orioles, Pirates, Royals, and Diamondbacks -- the miserable teams who now occupy the dank prisons of despair we once adorned with furniture and a throw rug to make our long stay feel more homey.

NOW! Let's look at something fun! Something to make us think about bright lights in clear evenings and cowbells clanging with two strikes! Let's talk pitchers!

The Rays -- according to custom -- will be sending one of their five starters to the 'pen soon. In the playoffs, there is both (a) enough time in between games and (b) enough impetus for perfection to give your best four pitchers the absolute most playing time.

The gurus of the media might posit our top four starters aught be the men of most righteous character; men who possess a potent aura of Grit and a whisper of VerternKnowHow™. I expect we know better than to use such a humorously subjective method. Instead, let's cull together an assortment of comprehensive pitching metrics and use basic, neo-classical economics to establish a better-informed opinion.

To adjust for luck, we also need to examine:

So how do our pitchers rate?

Green is good, and David Price is very green. At the same time, we see Jeff Niemann's inferior ERA -- relative to Wade Davis -- underscores his superior SIERA, tERA, and FIPs. Moreover, his LOB% is lower (indicating he is closer to normal luck than Davis). Davis has a more normal BABIP, but both pitcher's BABIPs are both pretty close to their career numbers.

Using a radar chart, we can simultaneously compare the pitchers and their stats: 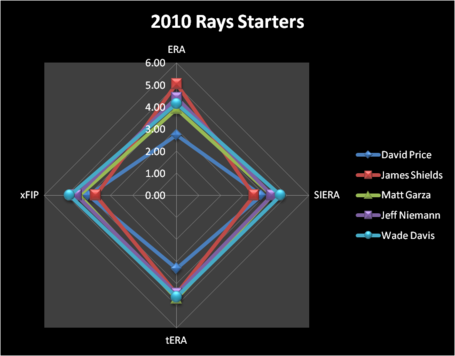 Closer to the center is better. With this chart, we can easily notice how phenomenal Price's ERA and tERA are, but his xFIP and SIERA appear much less illustrious. I'm of the opinion, despite PGP's very intriguing research, that David Price has been merely above average, yet quite lucky. I think he's our best pitcher and brimming with even more potential, but his high 2010 LOB% does not correlate with his 2009 LOB% -- or our general expectations with LOB%.

On the other hand, James Shield's team worst (among starters) ERA seems to strongly contradict his strong xFIP and SIERA scores. I find this intriguing, but a moot point. Shields will be starting nonetheless. Our task is to examine Davis and Niemann.

One nifty way to compare these starters is using a simple, linear utility function. Because the baselines, standard deviations, and credibility of these stats differ, averaging them together may result in unequal or suboptimal weighting. Instead, lets put everything on a utility scale and see which pitcher scores best overall.

For the scale, we will assume the best performance in any one stat gives us the most utility (or 1.00), and the worst gives us the least (or 0.00). Thus, Price's 3.32 tERA is worth 1 util and Garza's poor tERA is 0 utils, with everything else being relative to those two.

Here's what we get:

Note: I've discluded ERA -- an inferior statistic -- and BABIP -- a statistic that (in this case) needed a more complex treatment. However, I have included LOB%. I know this will bristle some -- especially since it implies James Shields is better than Price (*Brad makes sly, sideways glance around the room*) -- so I've also calculated it without LOB% (in order to entertain the assumption that Price's LOB% is at least somewhat sustainable):

No matter how we slice this particular cookie, Davis is the odd man out. In the first table, he rates a painful 0.02 utils. In the second, he musters a pathetic 0.01.

Lately, I have heard arguments that Davis or Neimann should start on the merit of recent performances. In other words, since both have been pretty terrible since returning from the DL, the one who pitches best this final week is clearly the hotter one and should be the fourth starter.

Looking for the hot starter is neither a sound nor proven methodology. Tom Tango's The Book clearly demonstrates that hot and cold streaks begin and end instantly -- we cannot use them as barometers of future success (except for in the case of a lingering injury, which I don't think either have). Instead, we should base our analysis on longer swathes of history and career numbers. And if we do that, we can only say one thing:

Wade Davis, go to the 'pen!