ALDS Game 4 Preview: Tommy Hunter vs. Every Left Handed Batter on the Roster

Share All sharing options for: ALDS Game 4 Preview: Tommy Hunter vs. Every Left Handed Batter on the Roster

After yesterday's improbable comeback -- improbable given our recent performance -- I feel as though any additional Rays baseball is just bonus. I -- like many others -- had begun the lamenting process, quietly rosterbating over some tear-stained spreadsheets.

I know the post-season is a cruel mistress, always calling me at my house when my wife is around. And so I shouldn't have been too surprised when she began tossing my possessions across the room, screaming, "I swear to God, I'll sweep your team if I want!"

"You wouldn't dare! We just spent all that time winning the toughest division in baseball! Would you really through throw all that away just because you are a crusty botch of nature*?"

*from: Troilus and Cressida, by Wm. Shakespeare

Indeed she would. The Playoffs really doesn't care for the talents involved on either side -- it recklessly tosses about wanton wins to the deserving and undeserving alike. One of the positive things to come out of yesterday's game: I actually happened to be recording at the precise moment I decided to kill home-plate umpire Jerry Meals.

So now we face Game 4 of the ALDS, or Bonus Game 1 of the Fickle Playoffs System. Of all the pitching match-ups thus far, this one favors us most.

Tommy Hunter vs. Wade Davis
This is what you will hear TBS's mind-numbingly bad announcers say tomorrow: Tommy Hunter has had a great season with the Rangers, going 13-4 with a 3.73 ERA. He's a crafter pitcher who mixes cutter and curves to keep hitters off-balance, but doesn't blow anyone away with his 90 mph fastball. He's one of the young stars of the game who know how to win games and Cliff Lee, Cliff Lee, Cliff Lee, ahmen.

Here's the truth: Tommy Hunter has enjoyed some rare luck. He sports an 80% LOB% and a 4.70 xFIP. On top of that, his career xFIP against lefties sits at 5.07 (HAHAHAHA!!! Guess which side of the plate most of our best hitters hit from?). This makes sense for a guy who relies on a cutter and a non-12-6 curve because both tail in towards lefties and thus look FAT.

From the opposite dugout, the Rays send the venerably bearded Wade Davis. Davis does not have an especially shiny xFIP (4.81) or a good-luck-free LOB% (78.1%), but as StaplesManiac pointed out the other day (whilst in the middle of completely obliterating my post about Wade Davis), the cumulative numbers undersell Davis:

As the second half of the season progressed, his LOB% moved downward: 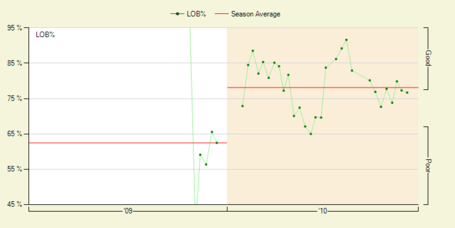 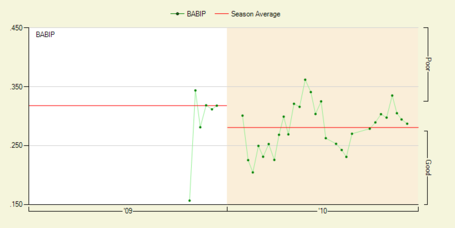 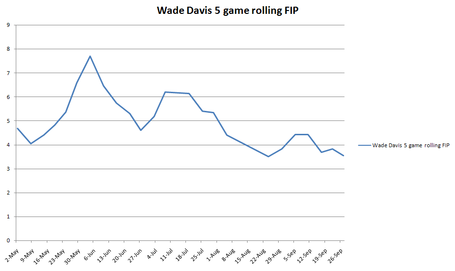 There are two possible explanations here: (1) Davis got lucky with HR/FB (or his luck simply balanced out -- he finished near league average) or (2) Davis got better and sharper.

Either way, Davis was a 4.00 FIP pitcher after the All-Star Break -- and one with completely neutral platoon splits (4.58 career xFIP verse both hands).

Ben Zobrist and Carlos Pena, Save Us!
On the other side of the coin -- the offense -- we have had two shining glimmers of hope this post season: Ben Zobrist and Carlos Pena. In the first two games, Zobrist couldn't help but murder the ball -- unfortunately it kept landing in open gloves. In Game 3, Pena starting showing flashes of 2007, slapping line drives and crushing towering fly balls.

Dan Johnson -- despite receiving prison treatment from Jerry Meals -- also went 2 for 3 with a walk and a double; and Carl Crawford also hit a Texas-style homer out to right. BUT! If we want to win Game 1 of the Bonus Round, a hot Carlos Pena makes the task easy!