Behind Enemy Lines: Games 3 and 4 in Arlington

Share All sharing options for: Behind Enemy Lines: Games 3 and 4 in Arlington

As soon as the Rays clinched the AL East, I was online booking a ticket to Dallas to watch game three and (possibly) four of the ALDS.  I don't live in Tampa, or anywhere in Florida for that matter, so my only real option for a live game was buddying up to a friend from college--a Rangers fan--who was headed to the game.

I booked my tickets with the highest of hopes, but after the Rays screwed the pooch in the first two games, I wondered if my trip would leave me with a sad, lonely Sunday in Dallas.  But, oh no, the Rays would not go so easily into that starry night, and I would ultimately be rewarded for my Texas trek.

For Game 1, the Texas fans were obviously quite jubilant.  When I walked into Sherlock's Baker Street Pub before the game, I was met not with vitriolic stares of hate, but with bemusement and confusion.  "Is that a Rays fan?" Could be heard as I passed by.  Again, the tone wasn't, "What's a Rays Fan doing here," but rather, "A Rays fan, I did not know such a thing existed."

Upon seeing my baby-blue Ben Zobrist T-shirt jersey, one guy remarked, "Who the hell is Zobrist?"  Of course, he would find out during the game.

I met one other Rays fan at the Pub.  A guy born in St. Pete, who'd been living and working in Texas for the past eight years.  "When I heard the Rays were playing the Rangers I had to make it to the game," he said.  He was especially proud of our manager, John Madden, and what a smart baseball mind he brought to the team.  I wasn't going to correct him, after all, a friendly face is hard to come by in Dallas, but thankfully he realized his mistake.  "Steve Madden," he came back with.  I just smiled and nodded.  (If you don't know who Steve Madden is, ask a lady-friend.)

Game 1 after the jump.

Note: All pictures were taken with the IPhone, and some after a few adult beverages, so don't hate the cameraman too much.  Also, I hate posing for pictures, so you'll mostly see my friend---a Rangers fan.

My interactions with the fans seated around me were jovial.  I'm not a constant screamer, I cheer loudly, but in short bursts.  This might sound a bit self-aggrandizing, but Rangers fans seemed to think Rays fans were like unicorns:  at first, you don't think we really exist, but when you meet us, we're kind of awesome. 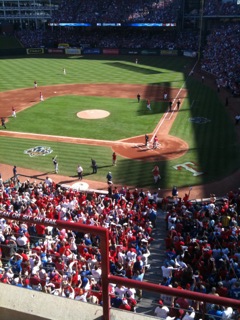 We had nice seats in the club level for the game and my favorite line of the night was after Zobrist lined a double to the left-center gap in the 7th: "Don't worry, he's the only good player on their team!"

Of course the Rays made a great comeback and use of O'Day and Feliz perplexed me as much as my friend who was none too happy after the game. 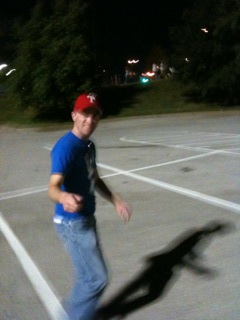 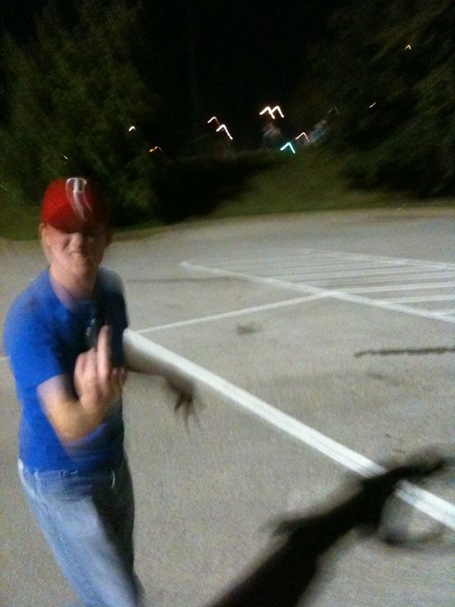 The mood of the second game was not as kind as the first.  That morning in downtown Dallas, four hours before game time, on my way back from breakfast, a random guy walking off an elevator wasted no time in yelling "asshole" across the lobby at me.  I'm all for some ribbing, but eight in the morning is a bit early for me.

Seats for game four were outrageous, and if you saw a Rays fan behind the dish, it was me. 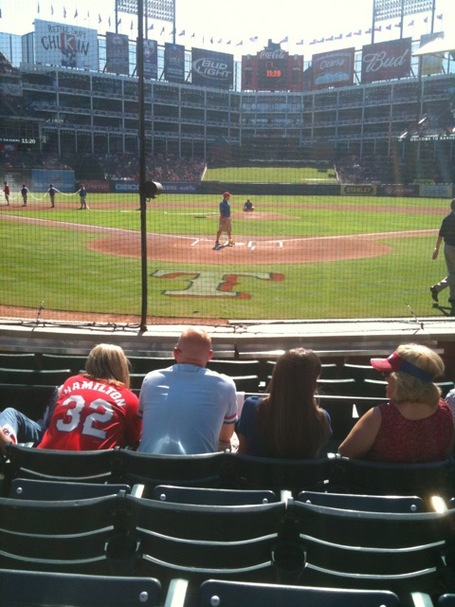 I realize that every team has bad fans, Rays included, but my favorite thing to hear is: "Throw strikes!"  This fan kept yelling that at Tommy Hunter.  The same Tommy Hunter that threw 54 of 73 pitches for strikes on Sunday.  Tommy Hunter had problems for sure, but throwing strikes was not one of them.  Whenever I hear this I think that before the game, while the pitching coach was watching the pitcher warm up, he's thinking, "He looks good.  Nice movement, good velocity, but there's something missing.  Oh, well go get 'em, champ!"  Then, later in the game, the pitcher throws a ball and some fan yells "Throw Strikes!" and the pitching coach is like, "That's it!  That's what I forgot to tell him!  Thank you, Observant Fan!  Without your keen insight, our pitcher would have never figured out that all he had to do was throw strikes."

While the stars at night are big and bright, deep in the heart of Texas, the noon sun is absolutely brutal.  As the sun moved left to right above us, that's how my sunburn went.  I'm like two-face at the moment.

I felt a bit bad for my friend, he made the trip, as I did, looking for a win, but his team came up short.  He did receive a small consolation as we met Blue Jays OF Vernon Wells after the game.  It's got to be weird for Vernon, watching these guys play after he's been sent home.  I suppose he's used to it, though. 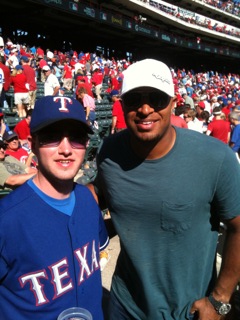 Anyways, the game was much more in the Rays favor Sunday and it was a treat to hear 49, 218 cry out and suddenly go silent after Vlad K'd with the bases juiced in the 5th  As I left the game I stumbled onto a dozen or so Rays fans cowbelling it up.  I never thought that sound could make me feel so good.

I couldn't have hoped for a better trip behind enemy lines, and as the Rays bring the series back home tonight, I hope all of you at the game cheer a bit louder for a team that decided-at least for this weekend--that they weren't ready to stop playing baseball.