Where We Stand: Looking at the 2011 Tampa Bay Rays Payroll Obligations

Share All sharing options for: Where We Stand: Looking at the 2011 Tampa Bay Rays Payroll Obligations

Since the season ended, it seems like the biggest question on everyone's mind is, "Can we keep Carl Crawford?" The argument - and it's a valid one - normally goes as follows: the Rays want to cut payroll, but they're already losing so many large contracts off their payroll (Pena, Pat the Bat, Rafi) that they could sign Crawford to a large deal and still have a lower payroll in 2011.

That questions has got me wondering: how much payroll space do the Rays have this off-season? They want to cut salary, but at the very least they're going to need to spend some money to shore up the bullpen, find some bench players, and/or add a first baseman. Depending on our minor league depth, the Rays may not feel like bench players are necessary to add, and they may want to fill the firstbase hole internally with Leslie Anderson, but they're still going to need to spend some money on the free agent market. How much flex room do they have? Do the Rays have enough salary space for Crawford?

According to the payroll information in the leaked financial documents a month ago, the Rays potentially lost a lot of money this season. That's not a huge surprise, considering they had a $76M (ish) payroll, but they also nearly lost money when they had a $56M payroll in 2008. That year, they managed to recoup $17M in the playoffs - a figure we surely didn't reach this season - allowing them to squeak into the green. Combine these facts with public statements from the front office this season, and it looks the Rays are setting their high water mark for 2011 at $50M.

Okay, so we know the upper bound the Rays will spend. How much money do they have already tied up in their current roster?

First, here are all the players that are likely leaving: 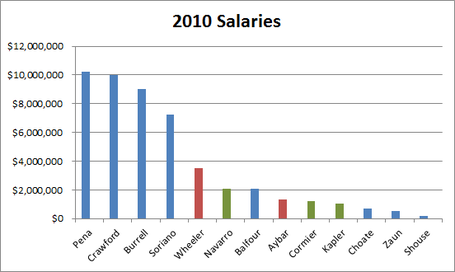 It's possible that the Rays keep Cormier, Choate, Balfour, and/or Wheeler, but let's assume that they're going to leave and that the Rays rebuild their bullpen from scratch. The total above is $49M - quite the hefty sum. Now, let's look at our players that are already locked into contracts for this upcoming season: 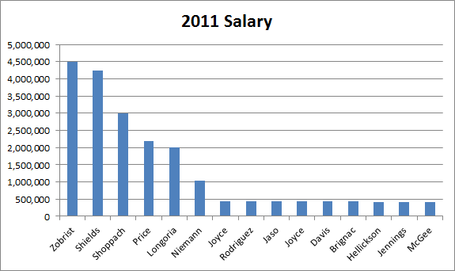 I estimated with many of the young players - whose salaries are going to vary, but will all be around league minimum - but everything else is set in stone. This totals are $21M, but we haven't accounted for our arbitration eligible players yet: Jason Bartlett, Matt Garza, BJ Upton, J.P. Howell, and Andy Sonnanstine.

Arbitration outcomes are always tricky to forecast, so let's try to estimate conservatively. Sonnanstine and Howell both shouldn't receive anything significant - maybe $1M for Sonnanstine and $1.8M for Howell (the same as his 2010 salary, considering he was injured). Bartlett figures to be the most expensive, considering he made $4M last season and is now entering his last season of arbitration - let's place his total at $5M. Garza is in his second year of arbitration and considering he won 15 games, had a 3.91 ERA, and pitched a no-hitter, he'll likely get a hefty raise. He made $3.3M last season, so I'd expect him to make at least $5M. And Upton is also in his second year of arbitration and he had $3M last season, so let's say he gets a raise to $4M.

Feel free to disagree with me on those figures, but I'd consider them all fairly conservative. Even guessing low, though, that brings the Rays' salary obligations for 2011 up to $37M. If they don't want to pass $50M, then they have less than $13M to build a bullpen and a bench. That's possible, but it certainly doesn't leave any room for a $15M salary to Crawford.

And so, disregarding the risk in signing a player to a long-term, big money contract, it doesn't look like the Rays have any room in their budget for Crawford. It's possible - and likely - that the Rays trade at least one of Garza or Bartlett this off-season, but even that wouldn't clear up enough room. I'm sorry everyone, it's time to get used to it - Carl Crawford will not be a Ray next season.

Here's my salary workbook, for anyone interested in playing with the numbers.