A Look at the Relief Pitcher Free Agent Market

Share All sharing options for: A Look at the Relief Pitcher Free Agent Market

This will be the third year I've done this here, and I still think it's one of the best way to look at the potential FA market for RPs. Essentially, we're taking two data points for each FA reliever and using that as way to judge them. In my opinion, there are two key things you want from a reliever: strike guys out and induce double plays. The reasoning is fairly simple; when a reliever comes in to a game in a high-leverage situation with men on base, inducing a double-play through a groundball or striking out the batter are the most likely to hold the opposition at bay. The great thing about using K% is not only does it give an idea of how good the pitcher strikes people out, it also helps controls for guys that walk a lot because those are batters faced where the pitcher doesn't rings someone up. Strikeouts per nine innings, on the other hand, does not give any inclination either way because it measures strikeouts against all outs.

So with this framework in mind, how do the available free agents compare?

Below is a table of all the free agent relievers, whether or not their team has an option, and their GB% and K% numbers from the last 3 calender years*.

As you can see it's sorted by K%, so as you go down the list you get guys that strike out less and less batters.

Now let's throw that in a scatter plot to really glean some information: 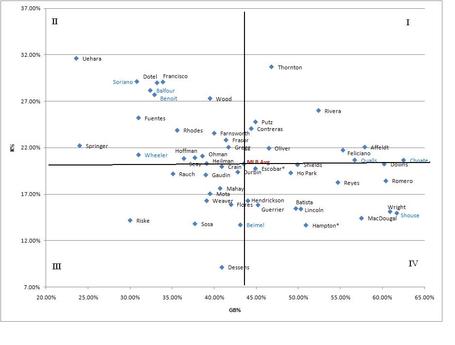 As you can see, I've made four quadrants based on the league average for both measures. Starting in the top right is the best quadrant a pitcher can be in: striking out a lot of guys and when they put it in play getting them to hit the ball on the ground. Not a big shocker to see Matt Thornton and Mariano Rivera excel in this area as they are two of the best relief pitchers in baseball. Quadrants 2 and 4 are fine for players to be in, this is where you'll find the strike-out/fly-ball pitchers and groundball specialists. The scary guys are in quadrant 3. They give up fly balls (which lead to HRs) AND they strike out a below average amount of batters.

So who looks good? Well outside of the big names, I'd look to try to score a Jeremy Affeldt or Pedro Feliciano. Another name that's really intriguing to me is Koji Uehara. The oft-injured Japanese import was spectacular in his short time while healthy. If he stays in the US he may be a reasonable candidate to buy relatively low on (assuming the O's have a sour taste in their mouth from their last contract). JJ Putz is a similar option to me as well.

What are your thoughts?

*Kelvim Escobar and Mike Hampton didn't have the track record as relievers to go solely on their numbers out of the pen, so I used career GB% and last 3 years' K%.