Every spring, baseball nerds across the country begin their Fantasy Baseball warm up routines: updating their spreadsheets, cracking their knuckles, and pushing up their thickly rimmed glasses. Fantasy baseball is not what its name entails. There are regrettably no dwarves, no hot-breath'd dragons, no faeries, and no loin-clothe wearing. Instead, Fantasy Baseball is merely a tale of pasty nerds, hiding from a scorching summer's sun and the dangers of emotional intimacy -- and that is precisely what makes it so great.

This year, the eclectic users of DRaysBay decided to host an official DRaysBay Fantasy Keeper League. The league totaled 12 teams (after trimming down from its original size of 24 teams) and included a $50 buy in.

After many months of hand wringing, lucky charm rubbing, and not caring, CBJones's team (Dan G. LeBeef) proved victorious over my own carefully fashioned team (the St. Pete Pelicans).

So, first -- and foremost -- we owe CBJones a hearty congratulations.

Secondly: Let's examine some of the interesting facts from this season.

The first two rounds in a fantasy draft are crucial, especially when the league is larger. Over the course of the season, there were only three trades, meaning the team you drafted was likely the team you had most of the season. Only the waiver wire offered help (granted, guys like Jose Bautista and Andres Torres were available, but there were few other free agent values).

So how did the first two rounds go down? Let's examine it using Fangraph's Wins Above Replacement stat: 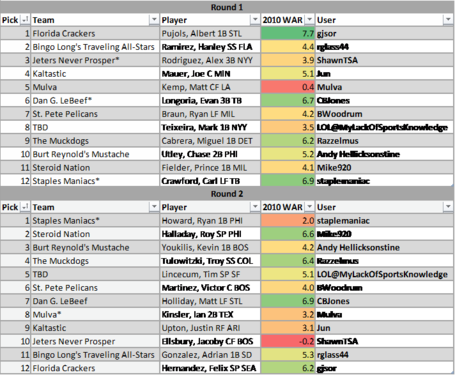 (Names with asterisks were auto-drafted at that spot. I'm not sure what happened with the bolding format.)

Of course, one of the problems with using WAR for fantasy analysis is that fantasy baseball does not consider defense, so good defenders (a la Carl Crawford) look more valuable than they really are in the fantasy world.

So who did the best and worst in these first two rounds?

As noted before, the championship came down to CBJones and I; however, we clearly took different paths to the top. Jones had a great draft, getting Matt Holliday and Evan Longoria. I got the oft-injured Victor Martinez and Ryan Braun, who I later turned into Vladimir Guerrero, Stephen Drew, and Shane Victorino (a combined 11.9 WAR).

Also of interest: gjsor's top drafting slot produced the most WAR, but a near-median W-L %. This is likely due to poor management and not enough grit.

Three of the best four records came from the "Bay Area" Division -- Mulva, Razzelmus, and myself. The three of us fought the most hotly contested division, but the most handsome rose to the top.