ALDS Game One Preview: The David Price vs. Cliff Lee Showdown, and the Rays Postseason Roster

Share All sharing options for: ALDS Game One Preview: The David Price vs. Cliff Lee Showdown, and the Rays Postseason Roster

I'm nervous as heck about this game. Actually, scratch that: I'm nervous as heck about this series in general. This is what we've been waiting for all season, and so now that it's here, I can't help but notice all the reasons why the Rays could lose. Our starting pitching isn't as strong as I'd like. Our offense can look anemic at times. What happens if Longo takes time adjusting to being back? Which team is going to make that crucial error? Just look at the Rangers' first three starters! Oh geez, oh my, my heart is a racing already.

But here's an important point to remember: the Rangers' fans are just as freaked out as us, if not more. We're the team that had the best record in the American League. We're the team that beat out the Yankees and Red Sox to win the AL East. Like James Shields is saying, we're the team to beat. The Rangers have just as many weaknesses as we do, but we're just not as familiar with their team. Fans on both sides of the aisle are freaking out right now, but if you find yourself freaking out too much, take a deep breath and relax.

And so, here's your Game One match-up: David Price versus Cliff Lee. Here's a scouting report on Cliff Lee's stuff, courtesy of StatCorner. 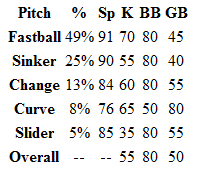 K represents the "swing and miss" potential of a pitch, BB represents how often he throws it for a strike, and GB represents how well that pitch generates groundballs. These are all on a 20-80 scouting scale, with 20 being the worst and 80 being godly.

As you can see, Lee throws strikes and his fastball is really tough to hit. He relies on his fastball a lot, and it's a pretty impressive pitch. He does change his pitch usage depending upon hand of the batter, though, as RJ covered over at The Process Report:

Lee goes to a first-pitch fastball (whether it be a cutter or a two/four-seamer) nearly 90% of the time versus right-handed batters. The rest of the first-pitch breakdown is tied to changeups. Lee tends to use his change often when he gets ahead except for 0-2 counts, where he uses it less than 5% of the time. Could be a sample size issue, or it could be that Lee wants to stay away from predictability. In its place he goes to a curveball a quarter of the time. Lee only had four 0-2 curves called as strikes this season, with each of them being up and over the plate. He loves trying to drop it at the batter's feet and having them chase, which they do a fair amount of the time.

Lee does not toss his change versus lefties often. His curveball is mostly absent too. It's all about his fastballs and an occasional slider. Worth noting is that Lee's groundball rates go up against southpaws, suggesting his location tends to give batters fits.

Cliff Lee is going to be tough, but at the same time, I like our chances today. Josh Hamilton is amazing, but he's been quite human against left-handed pitchers this season, with a .789 OPS against them. If David Price can neutralize him, then I like our odds against the rest of their line-up.

Five games is such a short amount of time, so it's important to realize that anything can happen. The Rays could knock Cliff Lee around tonight and destroy CJ Wilson and Colby Lewis - it's unlikely, but it's possible. Anyone could go on a homerun binge, like Longoria and Upton did in 2008, and a couple timely hits could carry us through this series. It's a roll of the dice and although that makes it very nerve-wrecking, it's also going to be a heck of a lot of fun.

EDIT: The Rays' postseason roster was just announced, and will be included in full beyond the jump. Our estimates last week were very accurate - the Rays put Niemann in the pen, left Aybar off the roster, and included Desmond Jennings. Rocco Baldelli made it over Hawpe, though, so that surprised me.