Share All sharing options for: Who is David Price?

I don't know what kind of player Price will be. None of us do. But we know what he has done already, which helps us predict what he may become. A lot of Rays fans developed full crushes on the young David Price. And rightfully so! In his first full season with the club, Price started in the All-Star Game and earned legitimate Cy Young consideration.

But -- whether it was my misfortunate to miss his pitching gems or it was my inability to overlook his high LOB% and xFIP -- I could not shake my concerns. I secretly feared everyone's great expectations were increasingly unfounded.

So, this offseason, I committed myself to ask this question and ask it with an open mind:

In his young career, Price has pitched 351 innings, sporting a 3.31 ERA and a 3.85 FIP. Over half of these numbers come from Price's quality 2010 season in which he pitched over 200 innings:

What troubles me most: Price's xFIP and tRAr (regressed tRA, courtesy of StatCorner) tell us Price is just normal. These are my great stumbling blocks. Both xFIP and tRAr have relatively strong correlations with future perform, forecasting more 2009-ish seasons for Price. On top of these things, Price had a 78% Left on Base Percentage in 2010 -- implying he was considerably lucky.

The Bill James Comparison
Billl James has already released his 2011 projections, which have Price going over 200 innings again, sporting a 3.94 FIP and 3.57 ERA. That's pretty good, but it also suggests that Price's true talent level resembles his 2010 xFIP more than his ERA.

On Baseball-Reference, we can find Bill James's similarity scores. These scores compare a variety of elements -- including wins, losses, starts, innings, ERA, walks, strikeouts, etc. -- to score players' similarities. It is an older metric, but there is still some value behind it. For instance, by looking at wins and losses, we are likely to find pitchers on excellent teams (like Price) -- which is good, because I really only care about the future of David Price in a Rays uni.

Either way, the similarity scores are an imperfect tool, but nifty for comparisons nonetheless. Looking at similarity scores through their 24th year of age, we get this crop careers (sorted according to their similarities to Price; the most similar on the left, the least on the right):

Looking at Fielding Independent Pitching (FIP), we find a wonderful slew of talent in this group -- which includes some great names like Tim Lincecum, Mike Mussina, and Schoolboy Rowe. Only Shawn Estes has a career FIP above 4.05, but -- looking at contextualized ERA (that is ERA+) -- we see this group was, on average, above average:

But how long did these pitchers last? Were they able to turn their quality young years into long and many seasons?

In the IP chart, only Price and Lincecum are still active. Clearly, some of these fellows had good, long careers. Even the brilliantly-named Schoolboy Rowe had about 10 seasons of 200 innings -- that's a lot of production! Of the retired group, the average IP was close to 2000, which is a really respectable number.

Let's compare how their first years compared to their eventual career numbers: 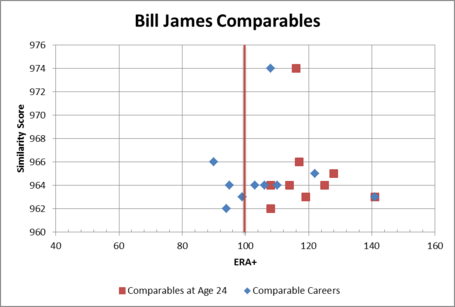 The highest comparison score (974) belonged to the almost stellar Roger Moret, whose career ended in bizarre fashion -- which is troubling.

The Best Case Scenario Comparison
Another way I approached this analysis was to ask myself: "What pitcher is similar to Price and whom I'd want him to turn into?" In other words, what's the best case scenario for David Price?

This is a useful exercise whenever we think someone is not that good. For instance, if we say Reid Brignac is the worst hitting shortstop evah, maybe we can compare him to a young Derek Jeter and find some reasons to hope in the aging curve.

Well, I did this with David Price and found this most delightful comparison: 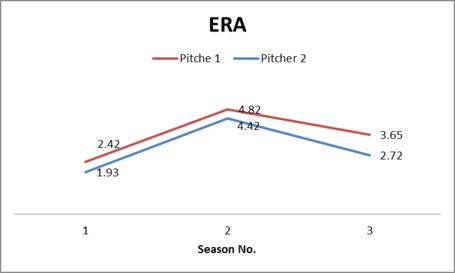 These two pitchers (one of them being David) had some up and down first seasons. 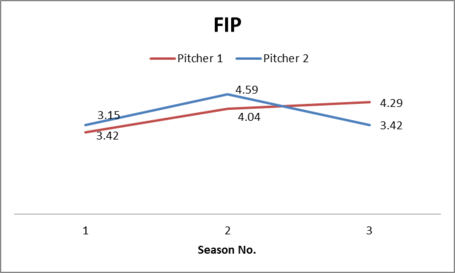 Their FIPs were okay. Pitcher 1 had a rough 3rd year, according to FIP, but was otherwise slightly better than Pitcher 2. 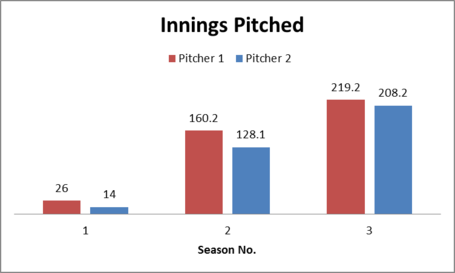 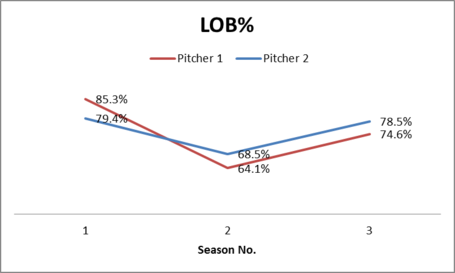 And they were nearly identically lucky and unlucky.

So who is it? Pitcher 2 is David Price, naturally, but Pitcher 1 is a young Randy Johnson. Both are tall, hard-throwing lefties, and both had really, eerily similar starts to their careers. Let's hope Price's ends in similar fashion (3.19 FIP, career WAR somewhere between 90-100, and 5 Cy Youngs).

The Young Studs Comparison
My final method of comparison was to query for players with similar, hot starts to their careers. So, I searched for:

This produced 35 players and David Price himself. This included a variety of players -- from Matt Cain and Mark Prior to Tom Seaver and Roger Clemens. I wanted to compare two valuable -- the components of a quality career:

I chose to divide IP by seasons because healthy pitchers tend to pitch more innings. The most durable pitchers will approach 200 innings per year. Since we constrained the players to only those who started 90% of their games, we avoid the risk of capturing John Smoltz players, pitcher who excelled at started, but moved to the bullpen. Their innings decreased, but their value and performance may not have.

Another possible constraint is that those who pitched poorly after their hot start may have eventually split time between AAA and the majors. That is selection bias, but I'm not sure exactly how it would affect the results.

This is an admittedly imperfect model of assessing health, but it's the best way I could think to do it, given that a number of these careers are still active.

As we might suspect, those who pitched many seasons proved generally more durable: 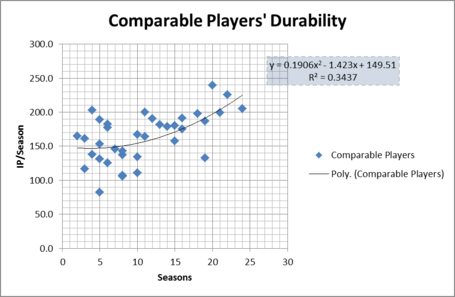 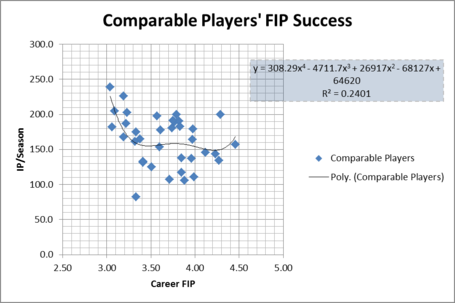 Conclusion
So, who is David Price? Is he the next Randy Johnson? Is he Roger Moret -- a footnote in history? Is he everything we hope he is? Or is he destined for mediocrity and disappointment? Thankfully we don't know -- and that's the fun of it!

Frankly, most of these comparisons are very favorable. It's hard not to notice how many big names come up when we look for comparisons, but at the same time, we encountered a lot of forgettable careers. Here's what it comes down to, in my humble opinion:

But the future remains unwritten, so anything can happen. Price may melt away into forgetfulness, or he may re-invent the game, burn through the record books, and make scouts start looking for "the next David Price."

Why, he's David Price. And he decides what that means.