It's about darn time. Crawford's been waiting for this award for years and even though he's consistently been one of the best outfielders in the game, he's been snubbed every time. This award means a lot to him, so congratulations Crawford!

Here's a quick visual of the top outfielders in 2010, as measured by Ultimate Zone Rating (UZR): 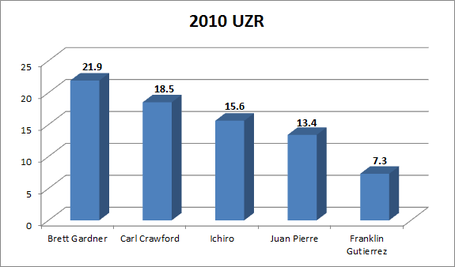 It's sad that Gardner missed out, but I can't feel too bad for him - he's still got plenty of years ahead of him and three other Yankees won this season. Outside of him, it looks like this time the stats and the mainstream opinions agree: these outfielders are darn good