Share All sharing options for: Derek Jeter and Five Other Free Agents the Rays Should NOT Sign

In a word: Absolutely Not.

I bring it up because since the off-season began, we've been pitching ideas for who the Rays should sign, from Magglio Ordonez to Lance Berkman, but we haven't had a good discussion about who we shouldn't sign.  As Andrew Friedman mentioned, "the market is flooded with players," but how often is a flood--a natural disaster--a good thing?  Sure, a free, working-condition, flat-screen TV might float up to your canoe (Joaquin Benoit), but generally you have to wade through all the filth to find some sustenance in an overpriced Taco Bell bag that you have to buy from the giant Crab-People that have taken over your town, the contents of which are--like everything from Taco Bell--more suited to be dropped directly into the toilet than to pass through your body (Pat Burrell).

Now that you're ready to run for the border, let's look at some free agents that the Rays should NOT sign this off-season.

1.  Derek Jeter, SS -- Let's just get this one out of the way, shall we?  I read an article about a week ago that suggested that the Rays or Red Sox should go after Jeter, the crown prince of the Yankee Empire.  From The Penalty Flag:

The difference between Boston and Tampa is that the Sox would do it out of spite just to upset the Yankees and play games while the Rays could actually help the organization by doing so.

First of all, as much as I despise the Red Sox, I do think they are above making an $80 Million dollar move out of spite.  Not much, though.

Now, for this being a savvy organizational move for the Rays: Well, we can't afford him.  That should end the argument right there, but let's pretend the Tooth Fairy's a Jeter fan and dropped Stu Sternberg an extra $80 Mil to sign him.  And Jeter has a home in Tampa so maybe we could get a 'home team' discount.  If every athlete--hell, half the athletes--with a home in Florida gave their respective teams a 'home team' discount, Florida would forever be the sporting pantheon of the universe.  Sadly, this is not the case.

How does Jeter help the Rays? With his bevy of Gold Gloves? (An award that even Yogi Berra knows is 50% fielding and 90% popularity.)  What about his declining OBP? (Which was closer to whipping-boy Carlos Pena's than you'd think.)  Jeter could certainly aid in blocking Reid Brignac's rise to an everyday starter.  So essentially, he'd be an expensive Jason Bartlett.

The only thing Jeter could bring to the organization is his name which would be used to put butts in the seats.  Do I think there would be more fans at the Trop if Jeter was on the team?  Around the internets there seems to be this thought that if Jeter became a Ray, all the Jeter/Yankee fans would follow.  This thought is mind-bottling to me.  Sure, it'd be a tent-pole event for a few months while ESPN got their rocks off on the 'rivalry' aspect of the game, but soon after the polish wears off, no one is coming to see Jeter the Ray.  Because, while the New York transplants love Jeter, they love him because he's a Yankee, not the other way around.

Jeter is 74 hits away from 3000.  When he reaches this milestone, his fans want him to do it as a Yankee.  A few weeks ago, I was talking to a coworker about how Wade Boggs is the only player to homer on his 3000th hit, a feat he accomplished with the Devil Rays.  The response: "Wade Boggs played for the Devil Rays?"  If Boggs had homered on his 3000th as a Yankee or a Sawk, do you think anyone would not know this?

Manny Ramirez has been tagged as a buy low option for the Rays, and he might make a good fit.   Here's to hoping Andrew Friedman doesn't get him confused with Ronnie "Mini-Manny" Belliard.  Belliard has made a career as a Manny look-alike. Both guys were even together the last couple seasons with the Dodgers, which probably looked like Jenna Maroney dating her look-alike in 30 Rock.  I can see the Rays signing Manny to a $3 Million dollar deal and Belliard showing up like that cheap knock-off DVD of Mean Girls you bought from Hong Kong off EBay.  You said it was for your sister, but be honest, you don't even have a sister.

After the jump, #'s 3-6: The Walking Dead, a lesson in discretion, and a few familiar faces. 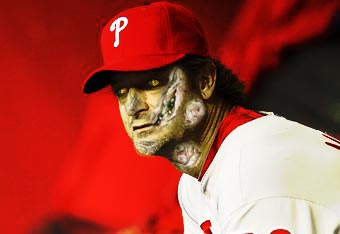 Old Man Moyer is here for two reasons.  Most importantly, he's a starting pitcher and unless he wants to move to the pen we don't need him.  We all know the Rays have an overabundance of starters and while Friedman won't trade an asset away for anything less than perfect value, you know he's taking calls on every starter not named David Price.

So why is Moyer on this list and not Cliff Lee or Chien-Ming Wang?  Because, Jamie Moyer is a zombie.  I, like any red-blooded, American Patriot, have been watching the Walking Dead on AMC this season and I feel I have conclusive evidence that Jamie Moyer is, in fact, a member of the undead.  The ageless wonder has pitched in the Bigs for 24 of his 48 years of age and despite having just had his 2011 season wiped away due to Tommy John surgery, announced that he plans to return in 2012.  If that's not the apocalypse the Mayans were talking about, then I don't know what is.  From the Philadelphia Daily News:

"Thanks to the advances in surgery, many pitchers have made successful returns to the mound after undergoing surgery similar to mine," Moyer is quoted as saying in a statement. "I look forward to the challenge of making a comeback for the 2012 season. I love this game and I still believe I can be a successful pitcher in the big leagues."

4 and 5.  Akinori Iwamura and Kazuo Matsui, IF

[Note: Yes, I am aware that these two Japanese Imports have been exported, but that just proves I was right when I wrote this.]

As much as I loved Aki as a Ray, his post-Ray career dive bombed quicker than a-- Uh, never mind...

Both Aki and Matsui enjoyed a few years of success in the States, but like so many Japanese position players, failed to make it last.  The exception that proves the rule, of course, being Ichiro.

So why is this bad for the Rays?  Well, KazMat must have either a greater language barrier than other players, a serious problem with discretion, or absolutely no shame.  Any one of these things combined with his last few mediocre seasons is enough for the Rays to steer clear.  We already have one 'AF', we don't need another.

6.  Carl Crawford, LF -- Yes, I know.  Carl Crawford is the sacred cow around these parts and his departure from the Rays leaves them empty, shallow, and cold.  You won't find many Carl Crawford haters around here--and you shouldn't.  He's the Rays career leader in Games, ABs, Runs, RBI, Hits, Singles, Doubles, Triples, Stolen Bases, and neck tattoos of the zodiac sign for Leo that someone might mistake for a sperm.  The guy has done it all and we should all appreciate that.  Hell, we haven't been plugging this whole "Thank You" campaign for nothing here.  But, should the Rays re-sign Carl Crawford as a free agent this off-season?  The answer is, sadly, no.

I realize there is a lot of discussion going on BWoodrum's rosterbation thread on this subject, and I'll point you there if you want a closer look at what everyone thinks the numbers are, but, as we've heard before, the Rays just can't afford Crawford.  Check that.  The Rays can afford Crawford, just not anyone else.  There are just too many holes.

Also, it boils down to the length of Crawford's new contract.  I don't generally speculate on contracts, but I'm going to ballpark it with $100 Million over six years (16.67 M/year).  Crawford is 29 going on 30 next year and makes the Rays better in 2011, but does he make the Rays better in the last year of his contract in 2016?  How about in 2015 or 2014?  Where does Crawford's production dip to the levels where he's not worth it anymore?  It's well known that Crawford's legs do not fare well over the course of a season at the Trop.  The turf doesn't give like real sod and that puts a hurting on the knees especially.  Sure, a new outdoor stadium could solve that, but only in Imaginationland will the Rays get one in time for Crawford to patrol left field for them.

Trying to sign Crawford is like a relationship where both people want to break up, but stay together out of convenience.  You are familiar with each other, you don't have to find a new place, and you have all the same friends.  It's easy to stay together, but the right thing to do is break up.  Carl Crawford and the Rays have shared a mutually beneficial relationship for the past nine years.  There is no need for them to be handcuffed to each other for another six.

As the hot stove heats up at the Winter Meetings, what free agents do you want the Rays to NOT go after?