This a continuation of my previous post in which I visually analyzed Carl Crawford's defensive range at Tropicana Field using MLB.com's Gameday. Now by popular demand, I switch on over to center field and look at B.J. Upton's defense through Gameday's data.

As in the Crawford post, here are some fielding metrics to gander at for Upton.

Not as impressive as Crawford, but Upton has been in the positives at home for all three seasons. His road numbers aren't as good as one would think. Although Total Zone isn't as good as UZR's range runs, there are no home/away splits on Fan Graphs. So let's move on to the visuals. 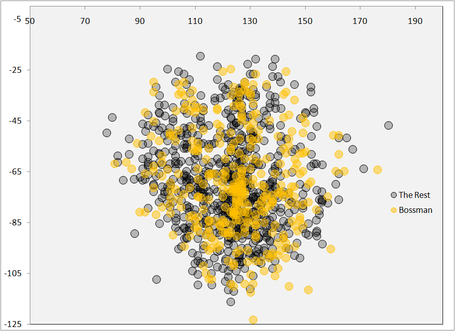 The center field wall is towards the top of the chart, home plate the bottom.

Due to Upton's shallow alignment in center, some of the outlying outs were made by him, especially those going forward to his left.

Now let's take a year by year progression of all fly balls fielded by Upton. First up, 2007. 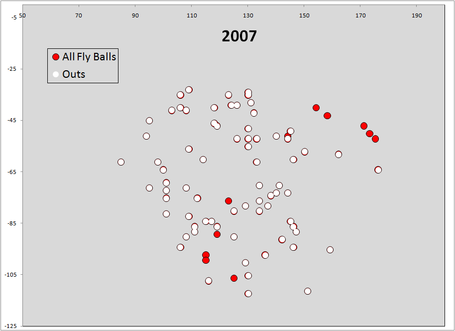 Upton did not log as many innings in center after converting mid-way during the season from second base. So one would expect some troubles in the transition. But it seems Upton handled it pretty well as he only missed fly balls from two distinct clusters: moving forward to his right and moving towards right-center, glove side. Although the latter cluster is likely Upton fielding the shallow fly balls that Delmon Young couldn't get to. Also note that Upton caught all of the fly balls hit behind him which you will see he doesn't do later on. 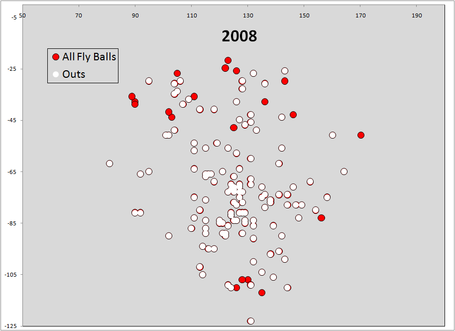 Those fly balls directly behind him seems to be his Achilles heel. This is likely due to his shallow than normal play in center. His shallow positioning allowed Upton to improve greatly on shallow fly balls missing only those towards his outer range. He would improve this even more in 2009. 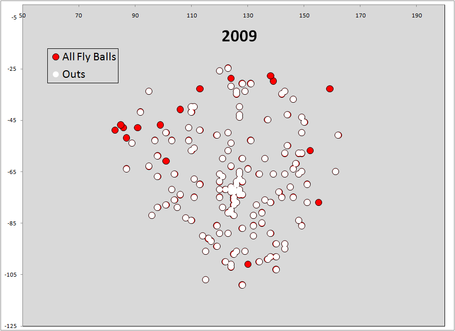 Upton was almost perfect on fly balls in front of him as he missed only one last season. Before I go further into that, notice that Upton struggled again with balls landing behind him with a notable cluster in left-center.

As for his improved shallow play, Upton might have been playing more conservatively. To visualize that, I made a gif of the previous two graphs.

In 2008,Upton caught 8 out of 12 fly balls fielded at or below the -105 mark compared to only two catches in 2009. This could be because he moved back several feet on average from 2008 or it could statistical noise either from different stringers or input. But the data is supposed to entered as accurately as possible so I will assume it to be correct.

To incorporate both Carl Crawford's and B.J. Upton's data, here is combined chart of all the fly balls outs both players made at Tropicana Field. 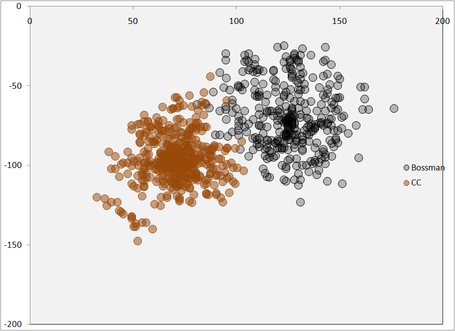 A very small lane where neither Crawford or Upton would not be able to catch a fly ball at all. Again no heat maps or anything to compare them to any league average or something of that sort. And also don't ask for any other Rays outfielder