The Case for Jarrod Washburn: The Reliever

Share All sharing options for: The Case for Jarrod Washburn: The Reliever

First a quick little story about a company amidst the marketplace.  For over a century, Kodak has been making camera's that even a novice can use.  They've made billions of dollars in that time marketing film and the cameras that use film.  For those of my generation, we've seen the rise of digital cameras that make anyone a potential photographer for little money and a little training.  Kodak was reluctant to focus on this developing market as print film was their bread-and-butter since their inception.

When you are that big of a company, why should you change?  You can dictate to the market what consumers want and what they will pay for it.  They were wrong.  Due to the rapid rise of digital, they saw a significant decline in market share as other companies beat them to the punch in research and development of these technological marvels.  They've since poured resources into digital and make many fine products, but do not control the market the same way that they once did.  So how does this tie in with free agent starting pitcher Jarrod Washburn?  Click the jump to find out.

Much like Kodak, Jarrod Washburn is an established commodity.  A name pitcher and a lefty to boot.  For years he has gotten by on guile and grit while not having a power fastball.  He's able to have success by limiting his walks (career BB/9 of 2.75) and, for a fly-ball pitcher, doing a pretty good job of keeping the ball in the yard (career HR/FB of 8.8%, expected is around 10.6%).  Oh yeah, he's also death on lefties.  Sound like anyone we know?  In my mind, he's basically a left-handed Dan Wheeler.  To wit: 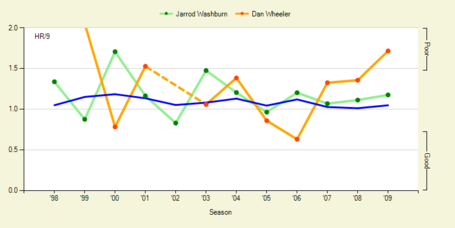 They don't move exactly the same, but the peaks and troughs are basically in line with each other, while Washburn gets the benefit of more innings to be able to smooth out some of the variance.  Career HR/9: Washburn 1.16, Wheeler 1.22. 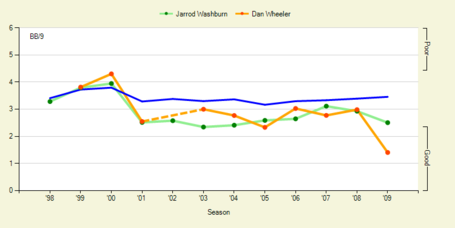 Extremely similar pattern among their BB/9.  You can see that both are well above average and have been for almost all of their careers.  Career BB/9: Washburn 2.75, Wheeler 2.76 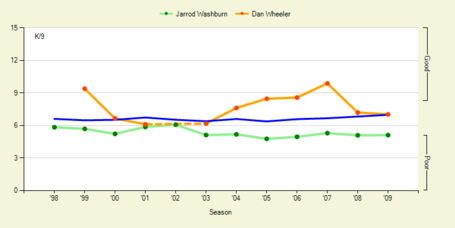 K/9 is where they start to differ quite a bit.  But keep in mind that Wheels comes out of the pen in almost exclusively favorable match ups (save your Maddon/Hickey jokes), as well as leaving it all on the field without having to save anything in the tank.  Career K/9:  Washburn 5.33, Wheeler 7.94

This is a big separation point between the two, but it brings me to my point.  Is Jarrod Washburn ready to admit that he may be best utilized in a relief role, where he should see an increase to his K/9 while facing primarily lefties?  The time is gone when he could dictate to the market his price and destination.  As he ponders retirement due to lack of interest, does he make the necessary changes to maintain a spot in the marketplace, even if it's at a reduced price?  I bring this up, because if we are looking for bargain talent (Damon, Hudson, etc...), what better than a lefty that can bring experience to a young staff?  Not only would he be of value tucking in the little ones, but he's pretty dang good against lefties.  Let's take a look at some pitch splits versus lefties in 2009.

First off, here's his usage of each of his pitches to lefties:

He sure kind of looks like a reliever, relying primarily on fastball/slider to keep them off balance.  A move to the pen might also bring his fastballs up a tick which could further separate them from the slider (a good thing).  Let's focus on just the three pitches that he uses more than 5% of the time: 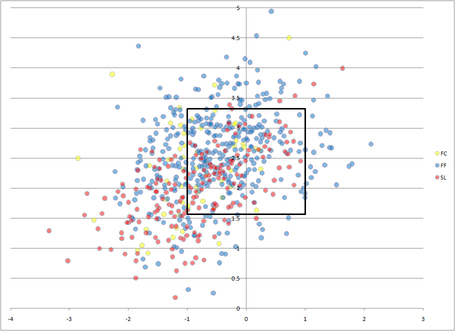 The top and bottom of the zone are the average height of batters faced in 2009.  The lateral boundaries are based on one foot either way for a 24" strike zone, compared to the 17" of the rulebook.  Much research has shown that these boundaries will work fine for what we are doing here.  You can see that he really likes to work away with all three of these pitches.  Occasionally, he'll backdoor a slider or run a four-seamer in on the hands, but he does a pretty good job of elevating the fastballs and keeping the slider down.  Lefties don't hit other lefties very well, especially on the outer half of the plate.  Washburn does a good job of keeping his pitches out of "THE NITRO ZONE" (sorry I miss Joe Magrane), and almost never leaves the cutter inside.  He does a great job of running that off the plate, leaving the batter to either take a hack or let his fate's lie in the hands of a liberal masked man with a hair-trigger finger.  Let's look at some more peripheral stats:

%NS in this chart signifies the percentage of time that a batter did not put a ball in play, I include this only because I was having trouble calculating just the % of balls in play.  As a reminder, SLGCON is total bases divided by balls in play, while whiff is swinging strikes per pitch.  You can see that his slider is a really excellent pitch, getting more ground balls than fly balls, not allowing practically anyone to get on base that does put it in play, and getting a ton of swinging strikes.  His four-seamer isn't bad either, getting a good amount of swing strikes, though he does give up some liners and more fly balls, he's basically giving up almost a single for every two balls put in play, not shabby.  The cutter seems to get hammered when it's put in play, but he gets quite a few swinging strikes and a lot of ground balls.  Here's a look at pitch results:

Pretty self-explanatory here.  A ball is a ball, a strike could be either looking or swinging, foul is tips, fouls, and foul bunts, and In Play is anything that got put in play.  This, again, seems to confirm that batters get good wood on the cutter and less so with the four-seamer.  We also see that, again, the slider is a really good pitch.

The reason to take a look at these things is to see if Jarrod Washburn would be a good bullpen candidate.  It is my opinion that he would be an excellent addition to the pen as a guy that can dominate lefties and do well against weak righties.  By realizing that his name, alone, is not good enough anymore, he can still be a part of the marketplace, even if he isn't controlling it.  Having a bullpen with Soriano at the back and some combination of Balfour, Wheeler, Howell, and Washburn would give us guys that compliment each other very well and can be used in a variety of situations.  Washburn should be had on the cheap at this point and a move like this could really give us the best bullpen in the Majors.  I hope he is smart enough to realize that in a changing marketplace, he who adapts last can find himself watching the game from a couch instead of a bench.  I hope the Rays as well as Washburn can realize this in time.

Many thanks to Joe Lefkowitz, Fangraphs, and you the reader for inspiring me.  The workbook can be downloaded at this link: Jarrod Washburn Analysis.

Dave Cameron also had a similar idea about Washburn and the pen this week.