I promise that this is the last B.J. Upton post I do until after the season starts. The idea for this came from a post by Erik taking a quick look at the Fan Graphs new split features showing that Upton produces great numbers when hitting line drives (by wOBA). And that I needed a reason to use some batted ball angles from Gameday for the first time in my published work.

Fan Graphs has spray splits for batted balls and rate stats. Here are Upton's splits from the past three seasons based on hit location.

Upton became a better pull hitter over the past three seasons while trading away a lot of line drives up the middle and the opposite way last season. And his BABIP suffered for that.

Now using Gameday, we can find Upton's spray not just for three locations but for six and in color! 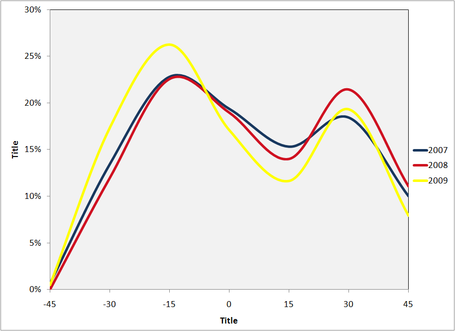 (Every line in each rgraph should be shifted to the left a little. Small sample sizes forces rou

There is a slight change in the spray with Upton pulling more and going less the other way. But that change becomes more apparent in the same graph, with the spray for line drive percentage. 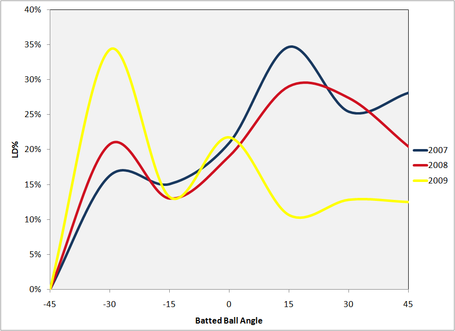 Upton gets more line drives closer to the left field line, especially last season. And the LD% going the other way is significantly lower in '09 than the previous two seasons. Although these numbers from Gameday don't match up too well with FG's BIS data. 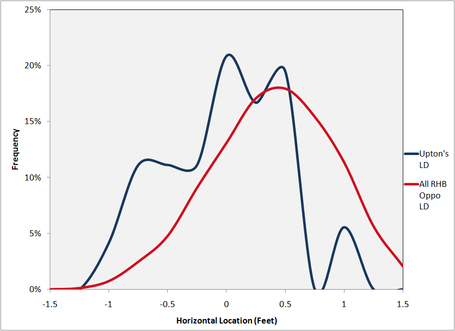 Upton did hit around the same location as the peak for all RHBs, but I'm guessing not many of those went to right field as seen in the previous graph.

Upton had a rough 2009 and he clearly was able to hit line drives the other way before, so I expect him to rebound in this area come April.

I wrote this post this morning so the analysis is pretty rough. But just enjoy the graphs and I will do much better next week.