This And That: Clustering Pitches, Leverage for Home Runs, and Batter vs. Pitcher Matchups in Pitch f/x

Share All sharing options for: This And That: Clustering Pitches, Leverage for Home Runs, and Batter vs. Pitcher Matchups in Pitch f/x

Just a little smorgasbord of a few ideas that I had in my mind recently that didn't warrant enough to become full posts.

There has been some buzz recently about pitch classification and pitch f/x, here and here. I was even involved to some degree when I posted nice tutorial how to do basic k-means clustering in R at Beyond the Boxscore on Wednesday (although more than a week ago). That is how I clustered Matt Garza's pitches last week. But when I was fooling around with the clusters for multiple pitches, I noticed something from the five projected starters. They all throw the same five pitches:

Niemann throws a splitter but may have thrown a few with a grip more akin to a changeup. The two seamer is interesting because the three rookies, Davis, Niemann, and Price, all started out throwing mostly four seam fastballs. But as the season progressed for each, they all found their way into using the two seamer quite frequently. All fingers point toward pitching coach Jim Hickey, who has similar powers as Cardinals pitching coach Dave Duncan and will likely do the same to young Jeremy Hellickson if he comes up this season.

This came up just because of Jason Bartlett. The same man who hit 14 home runs last season in 567 plate appearances, three more than he did in 1702 previous plate appearances in the Majors. Out of those 14 home runs, none came with runners on base. That led me to believe that there are two possible conclusions. Either Bartlett changed his approach and took a chance with the bases empty or it is in fact, a statistical fluke (sample size baby). Somehow I find that last one hard to believe. The last time Bartlett hit a home run with runners on base in a regular season game was over three years ago against Tim Wakefield.

But I'm not sure why Bartlett would change his approach with no runners on unless he believes that there is too much of a chance that if he really, really tried to hit a home run that he would either strikeout or fly out possibly ending the inning. That would be a nice hypothesis to expand on, only if the means to do so was possible. Wait, I'm getting off topic from the title of this blurb: Leverage Index.

Of course the 24 base out state isn't the only influencing factor on a hitter's approach. Game state is one and that is easily measured by Leverage Index (LI) and Win Expectancy (WE). Here is the average LI for home runs hit by Rays hitters last season.

Neutral is considered 1 for LI and 50% for WE. Bartlett hit those dingers in lower leverage situations on average compared to say high leverage Zobrist or near average Longoria. Ignoring sample size, the low leverage situation seems to be a trend for Bartlett.

Longoria has taken the

Only three of his home runs in his career came of high leverage situations which is LI over 1.5, or about 20% of all plays. 20%, or one-fifth, of 24 career home runs is roughly 5, just two more than actual. For home runs in 2009, 41% came with runners on base so Bartlett is just really bucking averages and not driving runners home in style. I wonder if Bartlett has a streak going for most consecutive solo home runs?

I was intending to do this for today's post but I decided to bump it back till next week. Here is just a quick teaser to what a match up looks like in pitch f/x. 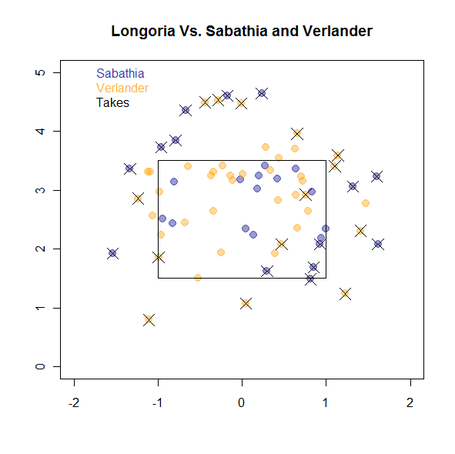 Longoria has swung the least percentage of pitches against Sabathia and the most against Verlander among pitchers who recorded at least 30 pitches in pitch f/x facing Longoria. They opt out from throwing him anything low and in and try around the belt frequently. But they can generate swings anywhere in the strike zone except low and away.