Will The Hit By Pitch Keep Declining?

Share All sharing options for: Will The Hit By Pitch Keep Declining?

While checking up on some baseball stats, I came across an interesting tidbit on James Shields. Shields hit 10 batters in 2007, 12 in 2008. and then only one all of last season. I then used the Play Index tool at Baseball Reference to try to find out if a pitcher has ever dropped the amount of hit batters as James Shields had. I got to the point where I saw the pitchers who threw at least 12 batters in a single season order by the year. In 2009, only two pitchers hit at least 12 batters. Compare that to 13 pitchers in 2008 and 15 pitchers in 2007.

I then looked up the Major League year by year totals for hit batters and found that the hit by pitched is on a downturn ever since it had a peak in 2001. 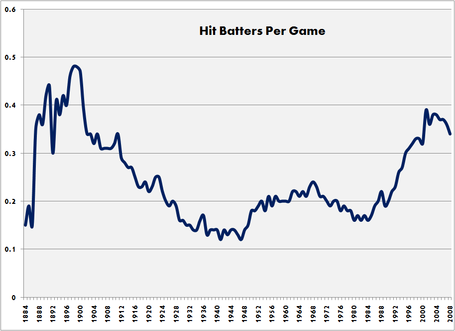 I only found this worthwhile to write because I thought of the recent ejection and subsequent suspension of M's pitcher Cliff Lee and that is might possibly be related. So are pitchers avoiding going in on batters in fear of suspensions?

It is easy to think not. Then again, James Shields got into the infamous brawl with Coco Crisp at Fenway in '08 and was suspended. And as I mentioned early, the amount of batters he hit then dropped by 11 the following season.

But there are practical reasons for pitchers to not hit batters. Doing so adds base runners. Ask James Shields. His only HBP in 2009 was with the bases loaded and two outs against Brian Buscher of the Twins in April. That run would tied the game at two and the Rays would lose by one run. Not the situation to a hit a batter in nor the actual batter to do it to (career .089 ISO. Ouch). If this is the case, then MLB teams are shying away from wild pitchers and/or emphasizing to their pitchers to avoid going too much inside to batters.

On hitters side, they have has much control as the pitcher whether they get hit or not. The hitter can control the physical part of getting hit by the baseball most of the time while they can also force a pitcher to avoid throwing inside in fear of missing location and having it go through the hitter's sweet spot over the plate.

But this is just my personal theories and thoughts laid out briefly. And I expect the common belief from most baseball fans is that the recent spike in hit batters starting during the 1990's would be related to the Steroid era.