Edwar Ramirez and a Pitch F/x primer, of sorts

Share All sharing options for: Edwar Ramirez and a Pitch F/x primer, of sorts

Piggybacking off of Trance L's post earlier, I wanted to take a look at some of the pitch F/x data on Edwar from last year.  Throughout this exercise it is supremely important that we are looking at 22 IP and 446 pitches.  Obviously, a small sample and we'll look at even smaller segments in the batter handedness breakdowns.  Nothing here should be considered definitive, but we can still glean some information from the data.  First off, here is his overall breakout by pitch type:

For explanations of this table as well as further analysis, click the jump...

Let's backtrack for a sec and go through this table one-by-one for those that are unfamiliar (if you are familiar please feel free to skip ahead).  CH stands for change up, FA/FF/FT is an aggregate of the fastballs, SL stands for slider.  Velocity is the average speed of that type of pitch once it leaves the pitcher's hand.  # is the aggregate number of that pitch thrown.  % turns the number of that pitch thrown into a percentage of total pitches thrown.  Ball %, CIS% (called strike), Foul %, In Play %, and SwStr% (swinging strikes) represent the five outcomes of every pitch and the percentage gives you an idea of how often each of those outcomes occurred for that pitch.  For example, when he threw his change up, Edwar was likely to throw a ball 38% of the time and would garner a swinging strike 16% of the time.  For P/x & P/z (pfx_x & pfx_z) I will defer to some definitions that Mike Fast was able to find:

In English, we are measuring how much the ball "moved" as compared to a pitch that would be on a straight trajectory.  In the tables that I will be showing, you will see the average movement for each type of pitch.  TB stands for total bases where a single = 1, double = 2, triple = 3, home run = 4.  BiP stands for balls in play, this includes home runs and anything else that was put in play.  Lastly, SLGCON looks at total bases per ball in play.  This gives us a good idea of how hard a pitcher is getting hit.  If he gives up a bunch of weak contact and some singles the number will be relatively low, if he gives up souvenirs and doesn't record many outs then the number will be relatively high.  An average number would be around .500.  Now that you have an understanding of how we are looking at the numbers, let's dig into what the numbers are.

Going left-to-right, top-to-bottom, we can see that Edwar has a below-average fastball velocity (especially for a reliever), that separates itself nicely from the slider and change.   Almost 9 MPH difference from the fastball to the change up is important, as the greater the separation, the more effective the pitch.  We can tell right off the bat that we don't really need to spend much time looking at the slider as it's only used around 5% of the time, total.  Knowing that he is a FB/CH reliever means that he will be different than a guy like Dan Wheeler (FB/SL) and more like Joe Nelson (FB/CH).  He has a different mindset when facing a batter and pitches to set up the change up when he can.  We can see that he's a little more nibbley with the fastball, throwing more balls, but getting more called strikes as a result.  In Play % and SwStr % are two of the most important pieces of seeing when a pitcher is over-matched.  Despite the many theories of pitching to contact, using your defense, and whether or not strike outs are fascist, no pitcher wants to put a ball in play (Lance Cormier, maybe) and strives to turn those swings into swinging strikes.  This is where his pitches get interesting, as his change up gets put in play more often (18%), but has a pretty solid SwStr % of 16%.  There is some risk-reward there, but with the fastball, it's the opposite end of the spectrum, as it's not put in play as much (11%), but he doesn't induce as many swinging strikes.  As an aside, SwStr % in this form is based on swinging strikes out of all pitches, it may make more sense to look at swinging strikes per only the pitches swung at.  This would require removing balls and called strikes and maybe useful in future endeavors.

This is a lot of words to get an idea of where he is throwing the ball, which we can also see in a pretty picture: 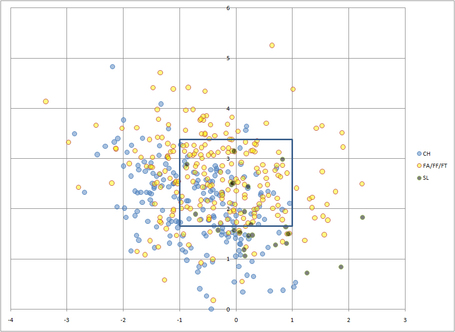 We can get some tendencies out of this, namely that he likes to throw his fastball to his arm-side and that he doesn't mind leaving the change up up in the zone.  The slider is generally below the strike zone and he doesn't miss much in the general lefty mash-zone, up-and-in.  We can see that better when we break out with the batter handedness splits, versus lefties: 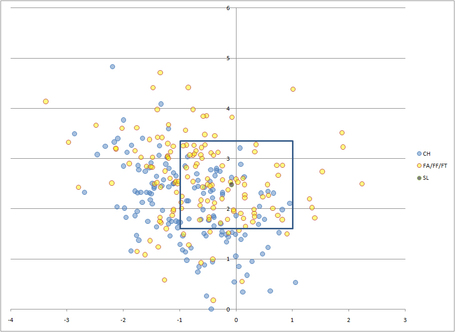 We can see that he'll only tease lefties with the occasional change up-and-in, but generally likes to work away, again elevating the change to the outside.  He doesn't really like coming inside, especially with the fastball, but doesn't mind missing down or away.  Let's see where he pitches against righties: 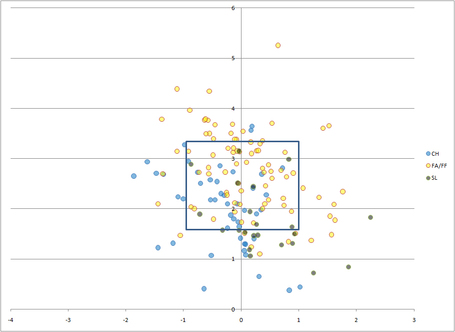 We can see that he's throwing the change to the outside, fastball more middle-in, and actually uses the slider, keeping it down.  He rarely comes inside to righties either, preferring to miss high (CH) or low (FB/SL).

While we are in chart mode, let's take a look at his Pitch F/x data: 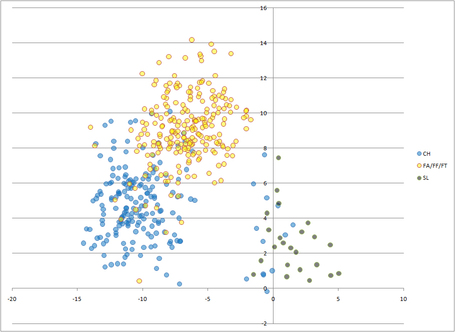 Picture yourself as the catcher watching each of these come in.  The balls that move down and to the right are sliders (you can see that a few slow sliders have been misclassified as change ups).  If it's moving down and in to righties, it is most likely the change, if there's some tail, but not as much drop, then it's probably a fastball.  He gets good tail into righties (almost 10 inches on average!) on the change and that is just as important as the speed separation.

Looking at the SLGCON data, we can see that even though the slider is put in play 35% of the time it isn't hit very effectively, part of this is probably the surprise factor of seeing one.  The fastball on the other hand is routinely hammered.  The change fares better, but still looks to be below-average.  Keep in mind that this is overall versus righties and lefties.  Which brings us to a good point to take a look at his breakdown based on batter handedness:

Right off the bat, we can tell that he threw almost twice as many pitches to lefties as to righties.  This makes sense since he is a FB/CH guy and it looks as though the Yankees used him in mostly as a LOOGY while having to face some righties.  He may not generate as many swing strikes against lefties, but his fastball SLGCON sure looks a whole lot better, unfortunately, the change up does get hit hard by abnormally-armed individuals even if he does have a respectable SwStr %.  Against righties, we see that the slider isn't all that bad of a pitch and should maybe be thrown more often, while his change is pretty dang effective.  The flip side is that his fastball gets murdered by righties.  To optimize his pitches better, he may want to up his fastball % to lefties at the expense of his change, and to increase his slider usage at the expense of his fastball against righties.

So what does it all mean?  Well, for the cost of a waiver claim the Rays could be looking at an inexpensive, young, relief pitcher (with options) that has tantalized with high strike out rates, but been the victim of hard hit balls leaving the yard.  Perhaps a couple of minor tweaks to his pitch mix might be all that he needs to have increased success.  Perhaps he was used incorrectly seeing too many lefties, or even too many righties.  Perhaps it would do him some good to get out of New Yankee Stadium with it's short porch in right, when he's mainly being asked to face guys that are doing their best to pull it out that way.  Perhaps he falls into the Oblivion Hole never to be heard from again.  Only time will tell, but it appears that Edwar Ramirez does more right than he does wrong and could be a useful (cheap) option to get some low-medium leverage outs, preferably against lefties.