This one comes from my colleague at Beyond The Box Score Jeff Zimmerman. Jeff took a look at the spray charts for David Ortiz and Edwin Encarnacion pre and post wrist injuries. While it isn't an exact science, the study is a fun little exercise nonetheless. With that in mind, here is a look at the spray charts of Evan Longoria before and after his lower arm injury of 2008 and hamstring strain of 2009. 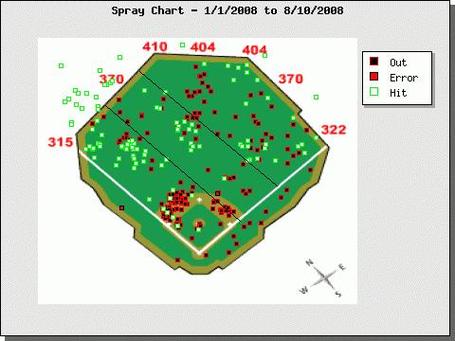 *note the black diagonal lines are not exactly and just used to split the field into three main zones.

This first chart is Evan Longoria from his call-up until he was hit by a pitch and missed six weeks in late 2008. As you can see the bulk of Evan's hit came in the lower two "zones" that I have marked off. However, there is a fair amount of hits going the other way with some power. 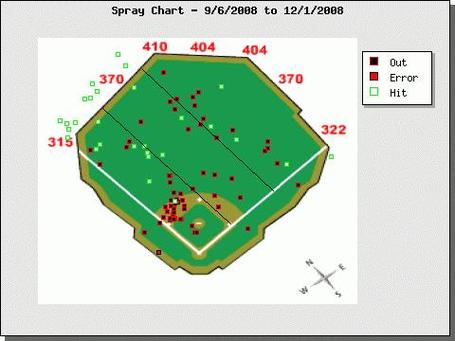 This is Longoria after his injury was healed up enough to play. There is a much smaller sample size here, but you'll notice that Longoria, already a pull-hitter, went almost exclusively pull after the injury and that opposite field power pretty much disappeared. 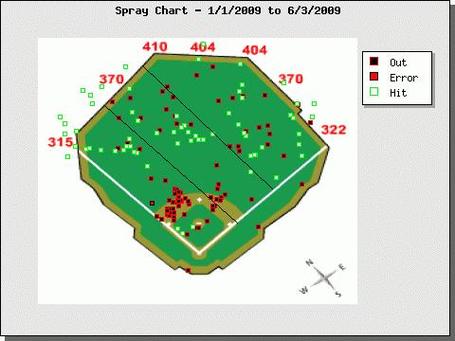 However, on June 2, while running a ball out to first base, Longoria pulled up lame with a hamstring injury. Erik and I were sitting on the third base side about four rows behind the on-deck circle and knew something wasn't right. Sure enough Longo would miss the next few games. Call it regression or injury related, but Longoria was a different hitter after that. 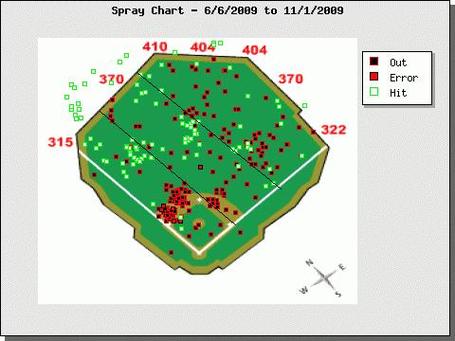 We have a much larger sample size here of 441 PAs. The bulk of Longoria's hits came in the lower two zones, but he did maintain an opposite field stroke. However, you'll notice the cluster of red dots in right and center field nearly hit perfectly to the fielder. In this sample set, Longoria hit .259/.349/.479 with 24 doubles and 20 home runs.

We know that Longoria wasn't likely keep his torrid pace to start the season going for six months, so I'm sure the second half decline had something to do with natural regression. However, it is interesting to see how a player swing and hit trajectory can change with injury.

Here's to a healthy 2010 and lots of hits to all parts of the Field for Evan Longoria. Oh and did I mention he's signed long-term!