I wanted to take a look at Balfour's surrendered home runs in 2009 to see if there was any sort of pattern or if they were grooved or whatever.  To do this I used Joe Lefkowitz's Pitch F/x tool.  After the jump you will see each of the AB's in which he was taken deep.

Ryan Garko steps to the plate with men on 2nd and 3rd and 2 outs.  Kid's got power and first base is open so you would think he would be pitched very carefully with nothing too good to hit.  So what happened? 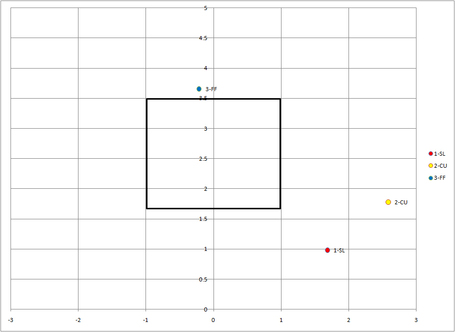 Balfour started him off with a slider that was swung on and missed well out of the zone.  The second pitch was another breaking ball classified as a curve ball, but most likely another slider, further out outside and taken for ball one.  Balfour goes to the high heat for the 3rd pitch, a letter high fastball released at 95.2 MPH.  This is his bread-and-butter pitch thrown above the zone and Garko hammered it out to left-center. 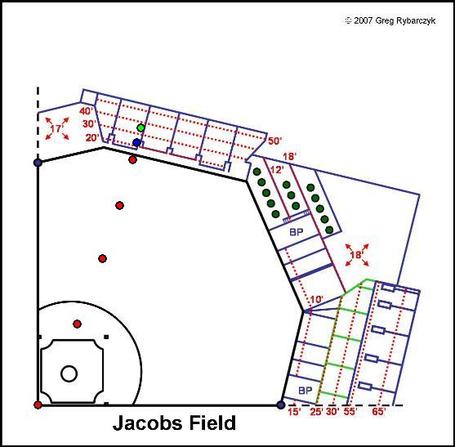 I'd say the process was pretty good on this pitch and Garko put a good cut on it.

After retiring Jeter and Damon on fly balls to end the 7th, Grant was brought back out to face Mark Teixeira to start the 8th.  Here's the location chart: 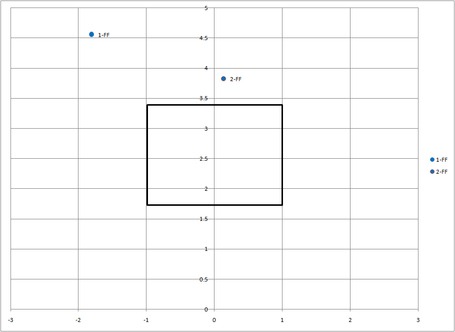 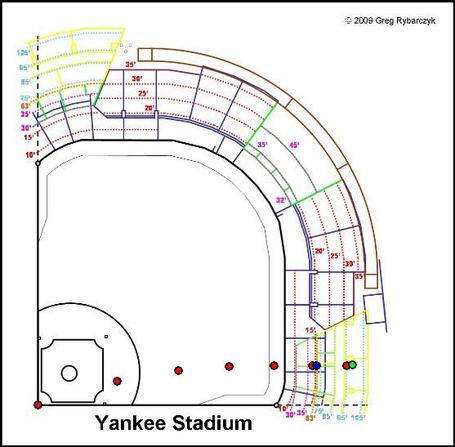 Teix is a good hitter and crushed it to the upper deck it looks like.  Perhaps Grant should have come back with a breaking ball, but hindsight is 20:20.

Little Sarge comes up after Grant got Howie Kendrick to flyout with runners on first and second to make two outs.  Matthews takes ball one and a called strike on the second fastball both around 95 MPH.  Grant tries to bury a slider but leaves it in the bottom part of the lefty nitro zone. 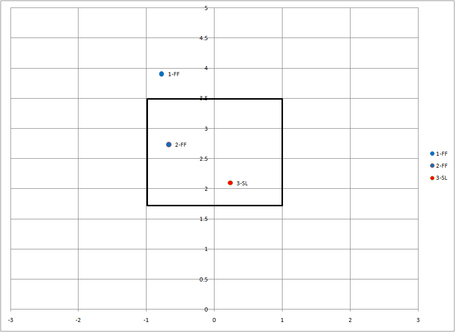 This appears to be our first really hittable pitch and in a 1-1 count (assuming competent catching) he should probably be looking to drop that in the dirt, especially after Matthews just watched a strike on the outer half.  Let's call that one poor execution or just a bad pitch that went a little over 400': 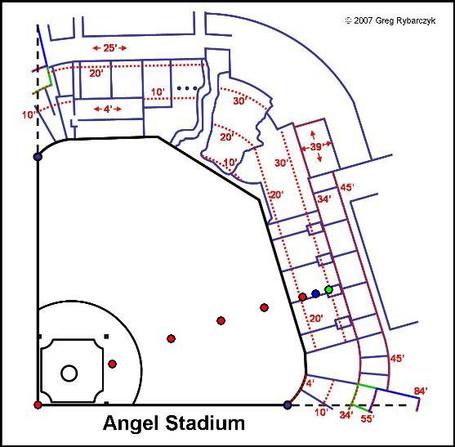 I think most of us will remember this shot, at least I have a hard time forgetting it.  Placido Polanco comes up in the bottom of the 8th with runners on first and third with 2 outs after walking Curtis Granderson (probably a good idea) in a game where Jeff Niemann was killin em softly to the tune of 3-1. 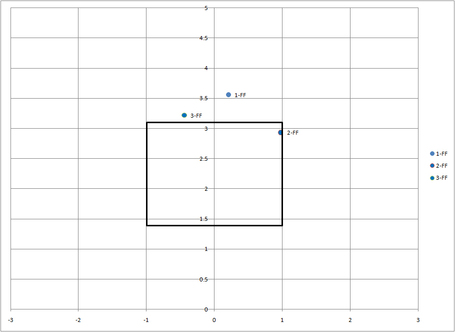 Grant leads out with a high fastball to a guy that doesn't walk a lot, but has a good eye.  He dials up another fastball over 95 MPH that was pretty borderline, but I remember being pretty outraged at the call of ball.  Grant goes back to the well with another fastball up to the diminutive righty.  Polanco turns on it and promptly turns an 0-3 into a pretty decent night on the fly ball that barely gets over the wall. 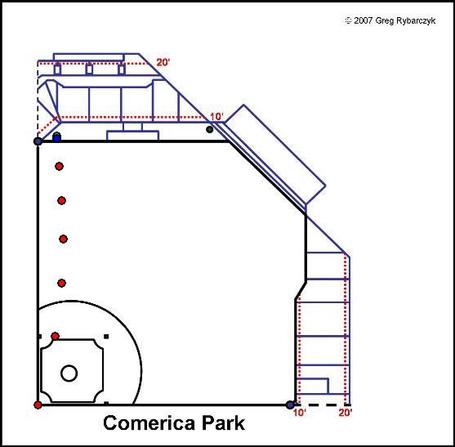 Again, perhaps Grant could have changed his pitches up a little, but at 2-0 he probably isn't comfortable throwing a breaking ball there.  We're starting to see a trend here in the fastball at the top of the zone getting taken yard.  I know he's supposed to live up there with his skill set, but it wouldn't hurt to bust one in on the hands or down in the zone once in a while.

Balfour is brought in to face George Posada with two on and 1 out.  Seems to me like this would be the perfect time to throw a guy out there that gets groundballs with a slow runner at the plate and a man on first, but I'm not paid for my opinion, you get that for free. 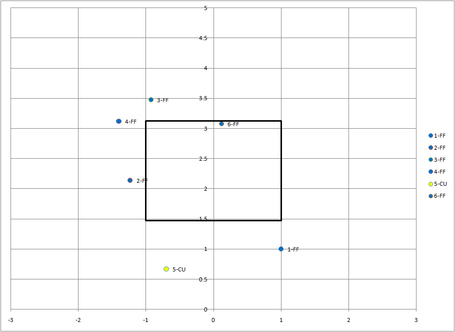 This looks like a pretty epic plate appearance vs. Jorge in a game the Rays were leading 2-1 at the time.  The first pitch is low and in to the switch hitter, but Posada fouls it off.  After going low and in, the next logical pitch is something away, which Balfour throws on the outer edge of the plate and is taken for a ball.  The third pitch is the third heater and Posada fouls off the up and away offering.  So far, three fastballs in three different parts of the zone, yes, good 1-2 now finish him.  Instead Grant goes up and away again for ball two, ok maybe he's setting him up for the breaking ball.  The fifth pitch is the "curve ball" in the dirt wich Jorge lays off of.  On 3-2, two on, one out, (with Melky Cabrera up next) Grant throws his only pitch that was in my hypothetical strike zone of the at bat and his 94 MPH fastball gets whacked worse than Tommy DeVito (and there was nothing we could do about it) as Balfour allows his inherited runners, as well as Posada to touch the plate. 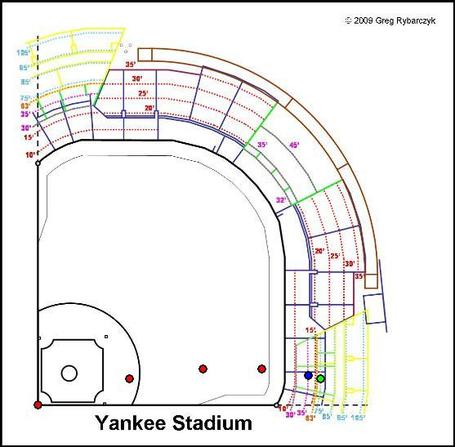 Ian Kinsler strides into the box in the bottom of the 8th of a game that is probably all over but the crying with runners on first and second and two outs. 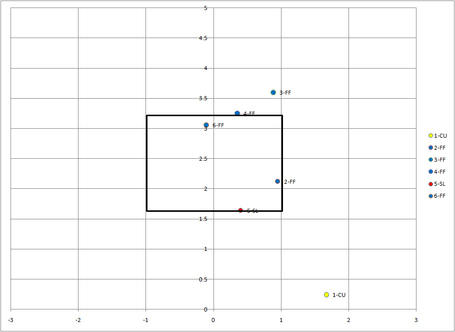 Kinsler is a pretty good first fastball hitter so Grant bounces him a curveball on the flop that's taken for a ball.  Kinsler takes a strike on a good low and away pitcher's pitch fastball.  Of note here is that Grant is topping out at 92.7 on the fastball after being around 94-95 all year.  The third pitch is a fastball that is taken and the 4th is the third straight cheeseball and gets fouled off as a borderline pitch at the top of the zone.  The 5th pitch was a perfect slider in the bottom of the zone that somehow is called a ball.  Looks pretty damn good to me.  Not trying to walk the bases loaded, Grant leaves a pitch in the top of the zone, but over the heart of the plate that Kinsler hammers out to left. 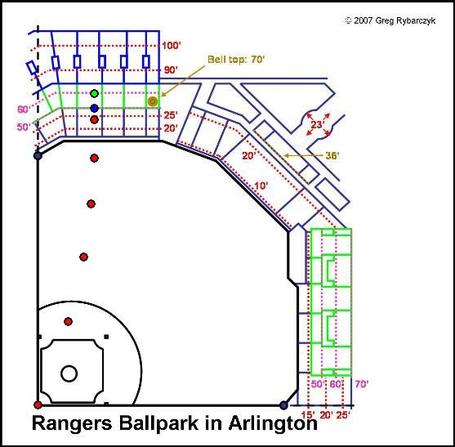 Some patterns here are that every single one of these came on the road, were usually fastballs up in the zone (or out of it) and at least two of them came after a borderline pitch was called a ball.  Balf probably isn't going to get the benefit of the doubt on close ones due to his reputation.  Talk amongst yourselves about how that should matter or not.  It's not as if he consistently grooved pitches in the wheelhouse of a batter (these batters, at least) and it does look like he wore down a little in the last month.

Some background, my strike zone is based on a 24 inch plate because it's easy and research has shown that 3.5 inches off the plate in both directions are still called for the most part.  The top and bottom is based on an average charted by the stringers that entered the data.  Speaking of which, you can download the workbook if you would like, Balfour's Dingers .  Within the "Data" tab I have highlighted the homers in yellow.  Much thanks to Greg and the boys at HitTracker for the adorable charts.  Grant Balfour is a lot of things, but I have faith in him, mostly because for us to be a great team we need him to at least be good.  I'd be interested in your thoughts in the comments.