Since we are still a few weeks from opening day, and have some time to reflect on the past, I'll once again dip into the Jeff Zimmerman idea well for another spray chart pre/post injury analysis.

In 2008, B.J. Upton played with a torn labrum for most of the season. It no doubt affected Upton's numbers in terms of power. He maintained a wonderful .389 on-base percentage, but his nine home runs were a far cry from the 24 he hit in 2007.

Because we know Upton had the injury in 2008, we can compare it to his post-surgery season of 2009 and see if anything changed. 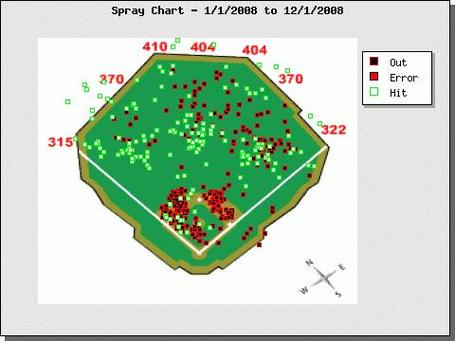 Here is B.J. Upton's spray chart for the entire 2008 season. As far as spray charts go, this one is a wonderful display of hitting to all parts of the field. Upton hit to left, center and right fiield, showing decent power to all fields. 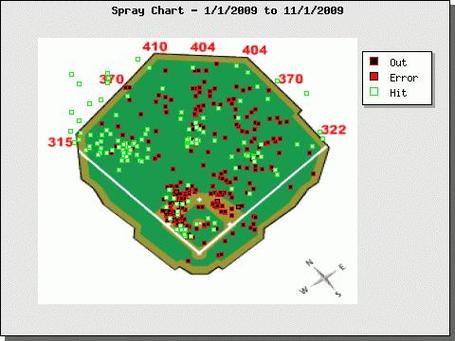 This is B.J. Upton post-labrum surgery in 2009. You'll notice the green clusters that were located in center and right field in 2008 have severely thinned out. You'll also notice that his power to those parts of the field also faded.

Honestly, Upton is the most difficult player to predict in 2010. He could hit .230 with five home runs just as easily as he could hit .300 with 20 homers.

The good news is everybody was raving about Upton's opposite field power after crushing two opposite field home runs in a game this spring. After looking at the charts from 2008 and 2009, let's hope that those weren't just spring training home runs, and were really a sign of good things to come this season.