Grant Balfour has been the subject of quite a bit of criticism of late regarding the decline in his performance from 2008 to 2009 and into this Spring. I figured this was a worthwhile time to clear the air on a pitcher who the Rays will need to get off to a fast start with J.P. Howell starting the season on the disabled list.

Grant Balfour emerged as a hero of the 2008 American League Champion Tampa Bay Rays. A mid-season callup from Durham, the Aussie electrified home crowds on his way to a FIP of 2.22 including a K/9 (strikeouts per nine innings) of 12.65. How good a season is a 2.22 FIP? Well, the great Mariano Rivera has only bested that FIP three times in his 15 seasons in Major League Baseball. The difference between Balfour's FIP and his 1.54 ERA was fueled by some luck including a BABIP of .233 and a HR/FB% of 5%. While relievers maintain more control of their HR/FB% than starters (10.6% assumed for the purpose of xFIP), it was unrealistic to expect a repeat of 5% in 2009.

What happened to Balfour in 2009? He came back to planet Earth in terms of FIP with a very respectable 3.77. However, his ERA, skyrocketed to 4.81, an increase of 3.27. How is that possible when his FIP only increased 1.55? Remember his good BABIP fortune in 2008? Balfour's BABIP year/year rose from .233 to .303. Not only did Balfour's HR/FB increase from 5% to 7.6% but those home runs unfortunately came on with many men on base. Essentially Balfour went from extremely lucky to William H. Macy's character in The Cooler.

If Balfour can repeat 2009's FIP with a more normal distribution of luck, we should expect to bear witness to near a run shaved off his ERA.

The next concern is his mediocre 2010 Spring. Below are Balfour's three most recent Spring seasons:

Spring has never been the Aussie's favorite season. The K/BB ratios are far worse than his regular seasons. Sure the strikeout total is embarassing this year by his standards, but we don't know if he is working on any other pitches. Even if he is not, 7.1 innings is an incredibly small sample size. The esteemed baseball analyst SternFan1 once commented, "Using sample sizes of 6,6 and 4 is pathetic, even with the disclaimer."

This leads us to the final issue. Grant Balfour has always had dreadful statistical Springs. Last season Balfour started the season nearly a full two miles-per hour slower on his average fastball than the final month of his 2008 campaign. This was not true of only Grant, but nearly every returning pitcher on the Rays. After several posts analyzing year/year road velocities and velocities of opposing pitchers at Tropicana Field, we concluded the Trop system was just under one mile-per-hour slower. As the year moved along Balfour's velocity increased and eventually we guestimated that the Pitch F/X machine was fixed. Is there a history of Balfour's velocity increasing as the season progresses? Let's look at the three relievers still around from 2008: J.P. Howell, Dan Wheeler and Grant Balfour on a month by month basis over both 2008 and 2009.

And for those who prefer colorful charts: 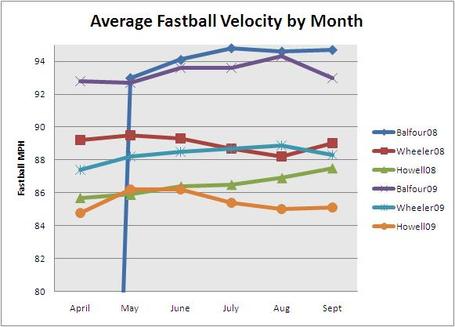 It appears as if Balfour has a history of working his velocity up as the season progresses. On a month over month basis he experienced quite a bit less than the two mile-per-hour difference between the 2008 post-season and the start of 09. All three pitchers experienced similar dropoffs from the 2008 postseason. Last year, Maddon intentionally conserved his pitchers due to the shorter offseason. Perhaps that had an effect on their initial velocities.  Its also interesting to note that all three pitchers tailed off during the final month of the season, perhaps an effect of pitchers warming up so frequently in Maddon's matchup bullpen. The Rays can ill afford for another slow start by Balfour. Hopefully, he can finish the Spring strong and march into 2010 in mid-season fire-breathing form.