Sonnanstine In The Pen: Rebounding From A Bad 2009

Share All sharing options for: Sonnanstine In The Pen: Rebounding From A Bad 2009

It took about two and a half years for Andy Sonnanstine to go from lowly A ball all the way up to "The Show". That also just so happens to be roughly the same amount of time it took him to go from being a Major League starting pitcher, to a Major League relief pitcher. His true calling is in the rotation and he will return to it someday. But for now, the journey back starts in the pen. This is just summary of my thoughts and analysis on Sonnanstine's move to the bullpen.

Can Sonnanstine adjust to pitching out of the bullpen? And will he have success there? The answer to the first question rests solely in his hands (literally), but the chance of second one happening is quite realistic. Many relievers have made the transition in the Majors from a starting role to pitching in relief with great success: J.P. Howell, Tom Gordon, John Smoltz, Scott Downs, Joe Nathan, among others (No Mo because he only had one season as a starter in the Majors before converting). Although there a lot of pitchers whose last shot to stay in the Majors is in the bullpen yet they don't quite make it as a reliever.

One thing that could help Sonnanstine's pitching overall is getting his change up more involved in his game plan again:

"I've never thrown (the change up) with that much conviction in my life," Sonnanstine said. "So I feel really good about it. I felt like I sold it with some good arm action, had good down and away depth to it. Just reading those swings and misses off it were really good confidence boosters."

There was a decrease in the amount of change ups from 2008 to 2009 and Sonnanstine himself said he needed to throw more of it last spring training(didn't happen). I expect him to use it to pre-2009 levels since he pitched much worse when he stopped using it as much.

I have seen some people commented on this recently since Sonnanstine will move into the pen, that he might be able to add some velocity as a reliever. This may be true for some of the more "traditional" pitchers but Sonnanstine rarely relies on velocity. Command of his pitches, changing his arm angle, mixing speeds, and maximizing movement is Andy Sonnanstine. There is no reason to believe he can't add velocity, but he should not do so at the expense of the previous attributes mentioned. As far as any data is concerned, Sonnanstine did log some innings in relief captured by pitch f/x last season. But there was only a marginal difference between the speed on his fastball and cutter in the different pitching roles (small sample size).

Free Zorilla already discussed this subject on Sonnanstine at the very end of last year, how he needs to attack hitters and get ahead in the count. Sonnanstine even mentioned this recently when he looked over some data and video from last season. I am just going to add a couple more charts to those lines. Using Baseball Reference's awesome split data, here are Sonnanstines splits for what happens to Sonnanstine after he either gets ball one, strike one, or the first pitch in play.

We can see Sonnanstine regressed nicely in 2008 but struggled mightily in 2009 as he threw more first pitch balls and couldn't get hitters out as much as he did when he got ahead of the count with the first pitch. Visually looking at the location of the first pitches in the at-bat, it is hard to tell if there was really difference between the two seasons. 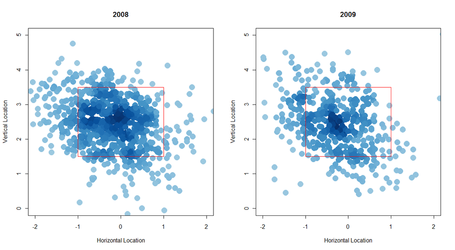 There was more data in 2008 but Sonny really pounded the strike zone and had some nice clusters around the outer edges.

I believe there were two key reasons to Sonnanstine's struggles last season. One is that hitters got used to his style and got some good tips from scouting reports compiled the two season prior. Second, is the location of pitches in certain counts and sequences. This is evident as his K/BB ratio was cut in half from the previous season after getting ahead count 0-1.

How he will be used out of the bullpen is anyone's guess.