Already today we've had a product review and a give-away contest, so why don't we mash the two ideas together and do them both at once? Without further ado, I present to you the latest baseball iPhone/iTouch application to hit the market: Batting Goggles created by Craig Glaser, writer at The Hardball Times and Sabometrics.

In short, Batting Goggles is an app that allows you to visualize a batter or pitcher's "hot spots". Ever see those charts during baseball games that showed you how a batter fared on pitches in different areas of the zone? Well, now you don't have to be at the mercy of TV announcers in order to view one for any player you want. Here's an example: 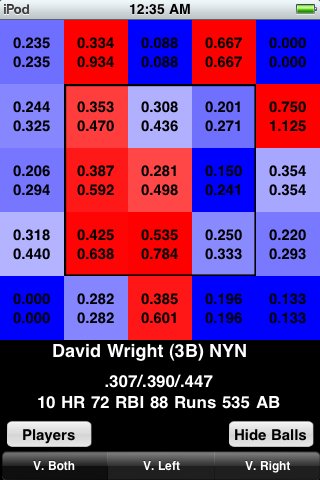 The top number is each section is batting average; the bottom number is slugging percentage. The numbers are calculated using any result that ended an at-bat, so strike outs are counted in these averages. Also, as you can see on the bottom of the screen, you can isolate performance based upon pitcher/batter handedness. So far it only includes data from 2009, but I believe the plan is for them to release updates with more data. At the moment, though, if you want see how B.J. Upton fared last season on inside pitches thrown by lefties, the answer is only a touch or two away.

To be honest, when I first saw this app released, it seemed kind of superfluous. I wasn't convinced that it was a useful, but upon second thought this is data that would take me ages to figure out myself. It involves sifting through all sorts of Pitch f/x data, organizing it, graphing it - heck, I'd be lucky to make a similar chart for one player, nonetheless every player in the major leagues. It's a practical, easy-to-access application of Pitch f/x data, which is cool in and of itself.  The data comes with an inherent small-sample size warning, but I have a feeling I'm going to be flipping through this app more and more during the regular season, trying to see how our pitchers should throw to certain batters and such. Where are A-Rod's weak areas? Did Shields make a mistake there or was the batter just lucky? Where are Longoria's strengths?

Even if it does nothing more than give you a bit of fun data here and there, the app only costs $.99 so it's a rather nice bargain. And if you're a cheap-stake and don't want to pay that much for it, then you're in luck: Craig was nice enough to give me a free promo code to offer to one of our readers. If you want a free copy of Batting Goggles, answer me this: of the nine zones located within the strike zone, what was Upton's weakest area last season? What was his batting average in that area?

I'll award the promo code to the person that guesses the correct zone and get closest to his batting average by the end of the game tonight. Have at it!