Share All sharing options for: Hank Blalock Reportedly Choosing Between Rays and Marlins

As the unofficial search for an additional left-handed bat continues, Hank Blalock remains on the Rays radar, at least according to Jon Heyman. According to the lastest report, Blalock is choosing between offers from the Rays and Marlins. Foxsports' Ken Rosenthal reports the Marlins offered him a minor league deal a few weeks ago, but it was not a "front-burner item."

Recently, Freezo did a more comprehensive analysis on Blalock's career including his injury concerns due to Thoracic outlet syndrome.  Instead of a career overview, I wanted to make a quick comparison for Blalock; one that could be come very popular should he actually sign with the Rays.

Once upon a time, Texas had high hopes for Blalock, but due to injury, Blalock never really reached his potential. Now, at age 29, he is looking for a job; any job and the Rays may be able to provide it.

In 2007, Carlos Pena was pretty much Hank Blalock. Pena, then 29, was a former Texas Ranger just looking for work. Also a formed hyped prospect, Pena had never reached his potential although he showed glimpses. 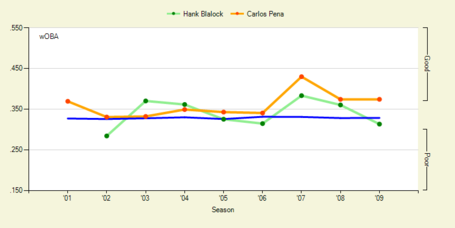 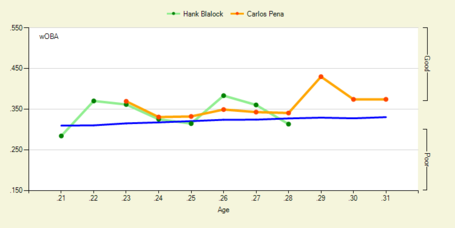 Looking at wOBA by age, you'll see that Pena finally reached that potential and peaked at age 29. Since then, he leveled off, but has maintained his status as an above average hitter.

In addition to the production similarities, the two share the same agent in Scott Boras. Boras has stated that he has not spoken to the Rays about an extension for Pena. However, if Blalock signs, Boras may give the Rays their short-term replacement should talks with Pena never get off the ground.