Share All sharing options for: Establishing In 2010: Matt Garza

This must be the year. After two full seasons of 4.teen FIP, sub 4.00 ERA, and electric stuff, Matt Garza is a pitcher that should be ready to make the next step. Although his FIP, tERA, ERA, xFIP, SIERA or what ever overall pitching metric you used, they all said he pitched only slightly better or worse from 2008-2009. But one other stat says his best season ever was in 2009.

WPA tells a nice story of how well a baseball player performed for every plate appearance. Fan Graphs marvelously displays those Win Probability statistics from 1974 and on. Garza's WPA has continued to grow every year since his first stint in the Majors.

The interesting stat to note is the situational wins, or WPA/LI. Although I won't look into that in this post, a theory is that he was steamrolled in low leverage situations in last season than in 08, thus resulting in a much lower WPA/LI in comparison to his WPA.

Now for the meat of the piece which I will analyze Matt Garza using pitch f/x and your favorites: pretty graphs.

Here is the spin movement for all his pitches in 2008 and 2009 for every pitch type. 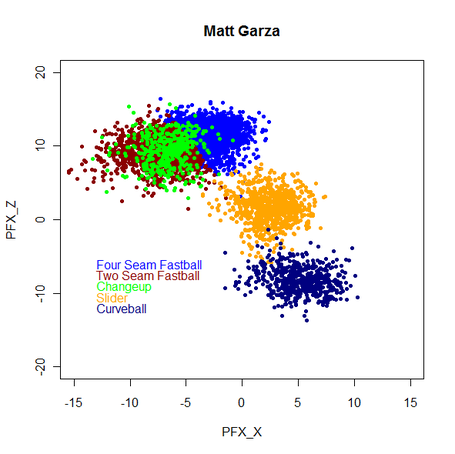 We can see that the two seam fastball has excellent movement, breaking 10 inches into righties at times. The four seamer gets good rise and the curve ball has a nice drop in movement. His change up is straight, meaning that it doesn't drop or tail more than the fastball, exhibiting the same spin movement. Now for the run values for each pitch.

What surprised me when I ran these numbers is that two seamer was so bad considering that was Garza's feature pitch. Knowing that Garza had platoon split favoring lefties, I decide to split the data by batter handedness and between the two seasons along with the two stats were substantially different. The results were telling.

That is almost five runs lost in one year. The SLGCON is over twice as much while the swings dropped 10%. His O-Swing also followed the drop by 12%. So let's look at the location of both balls in play and swings by year to right-handed hitters. 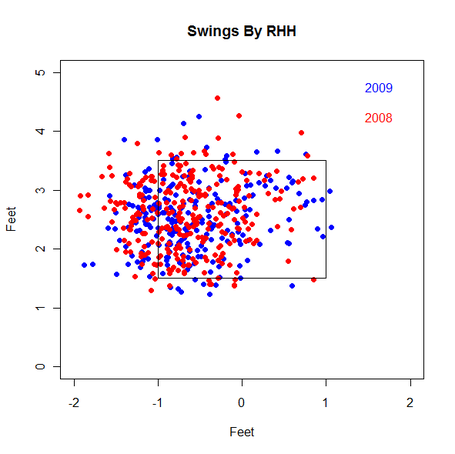 Not much to take from this except that it seems like Garza missed some of those extremely inside swings. And I mean extreme. There are several swings that were more than a foot away from the edge of the plate (at about -.7 in this graph). Either those hitters suck or they were fooled badly by a wicked two seamer that kept riding in on them.

Now for the balls in play. 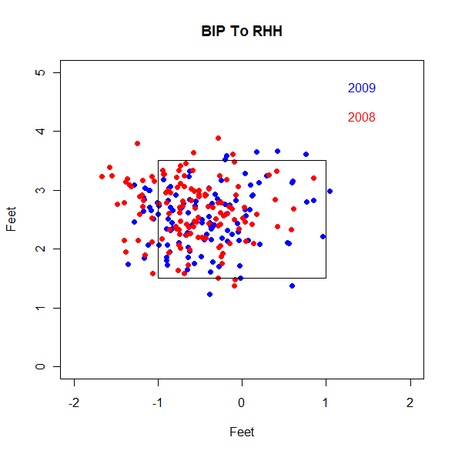 This a little better than the first graph. There is noticeably more blue dots (2009) over the plate than red ones. And those are recorded over the plate. That means right-handed hitters are hitting those pitches as they tail right over the heart of the plate and in their sweet spot. This evident in the next graphic which plots the density of his fastballs with the black dots noting the home runs he gave up. 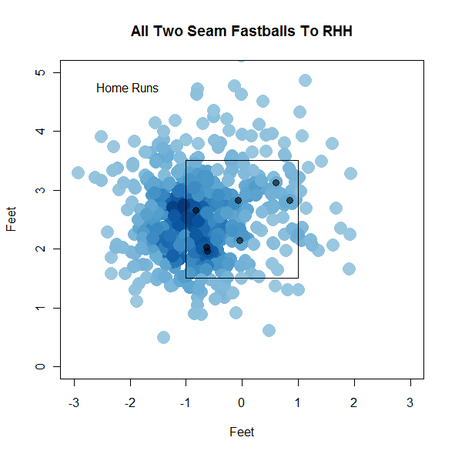 I see two clusters here. One just above the knees on the inside part of the plate and the other thigh-high anywhere from the middle plate going away from the hitter. The one outlier is where Garza most frequently places the fastball, which I assume to be very difficult to hit for power. And looking at the home runs individually, it appears all but one of the seven homers were pulled to left field, that one by Oakland A Rajai Davis. This to me seems like hitters just take the two seamer back where it came from, an angle towards right-center. Not an important point here, it is just interesting to me.

If Garza's going to establish himself in 2010 as a dominant starter, his two seam fastball needs to get on track. Having it be his worst pitch to right-handed hitters hurts his platoon split which should favor against right-handed hitters. Complement that tailing fastball with hard slider and a good breaking curve, there should be little reason for me to believe that Garza should have an opposite platoon split. And then finally turn heads among the traditional baseball crowd with 15+ wins and a couple of shutouts to boot.