On a night when the Rays needed a deep, dominating performance from their starting pitcher, David Price delivered.

Jeff Niemann's unfortunate early exit  on Thursday night put an early season hurt on the Rays bullpen - forcing them to get 23 outs in the third game of the season. With the Yankees in town, and no off day in between the two series, it was imperative of Price to work late into the evening; he did exactly what was asked of him.

His final line may have not been the prettiest, however, I would put tonight's 7.2 inning performance up there among Prices' most complete starts. Manager Joe Maddon said it was the best he's ever seen from Price.

This off-season we looked at Price becoming a more complete, more economical pitcher - tonight he was both. The 7.2 innings represent a career high, and Price used five different pitches to compile his 111 pitch count (15.4 pitch per inning average). In addition to his seven strikeouts, he induced nine ground ball outs.

It looks like the days of Price relying on just a fastball and sliders are long gone. Here is the pitch percentage for Price tonight.

Here is a much prettier visual of Price's pitch selection from Brooksbaseball.net 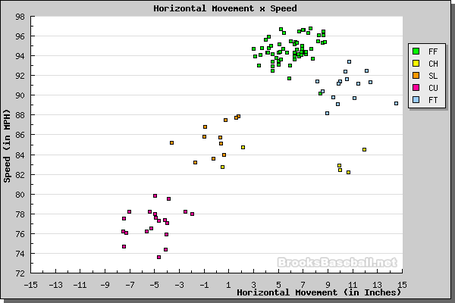 Price mixed up his pitch sequences all night using all five of his pitches in any count. After starting the game with mostly fastballs and curves, he introduced the slider and change-up around the fifth inning to keep the talented Yankees lineup off balance. He got 9% swinging strikes on the night, but 15.25% whiffs on his heater. Speaking of heaters, Price's velocity was north of 94 mph all night - maxing out around 97 mph.

To sum up how filthy Price was on the night, just look at this sequence of pitches against poor Curtis Granderson in the seventh inning.

Pitch 1: 85 mph slider - low and away for a called strike

Pitch 2: 77 mph curve ball - even more low and away for a called strike

Pitch 3: 94 mph fastball - a foot and a half off the outside corner for a swinging strikeout. No chance.

Price started to lose control in the eigth inning, but Lance Cormier came in to get a swinging strikeout with the bases loaded. Mike Ekstrom pitched a quiet ninth inning to preserve the 9-3 victory.

The Rays hitters welcomed Javier Vazquez back to the American League East with open arms. The nine runs (eight charged to Vazquez) represent a season-high for the Rays, who scored four runs in each of the previous three games. Each of the nine starters registered a base hit with eight of the nine scoring runs.

The Rays got on the board with Carlos Pena's first home run of the season. The two-run shot tied the game at 2-2 in the fourh inning. They would score five times in the fourth and added four more runs in the sixth inning.

The big blast in the sixth inning came off of the bat of Willy Aybar. Aybar, the only player on the roster to miss the first three games of the season, started in place of Pat Burrell at DH and blasted a two-run homer off of Vazquez. Right before Aybar's homer, B.J. Upton laced an opposite field double, another fantastic sight.

The Rays had five extra-base hits and three steals, once again showing off their unique blend of power and speed. Hat tip to David Price on delivering the goods, and a nice showing by the offense top to bottom.