Share All sharing options for: Rays Narrowly Avoid No-Hitter in 10-0 Loss to Yankees

Aaaand...that's all she wrote. Davis finished up the day after six innings, but his final line looked much less impressive: 6 IP, 7 H, 4 ER, 4 BB, 3 K, 1 HR. After holding the Yankees in control through the first third of the game, why did Davis get rocked later on? Let's see, shall we?

From looking through the game data available on BrooksBaseball.net, it seems as though Davis' loss of dominance came down to two things: fatigue and pitch selection. Davis started off the game throwing fastballs that touched 94-95 MPH, but that faded to 90-92 after around 60 pitches. This was his first start of the season, though, and so I feel like this loss in velocity isn't anything to worry about (just like with Shields) and should be something that gets better as the season progresses.

The loss of velocity may not have been that big an issue if Davis had been throwing another effective pitch besides his fastball. Davis threw a total of 105 pitches on the day, the majority of which of which were fastballs (74.2%). Davis also threw his change-up (7.6%), slider (7.6%), and curveball (10.4%) today, which isn't necessarily a bad thing in and of itself; those are almost exactly the same breakdowns that Davis posted last season during his stint in the majors. The problem was, Davis was only fooling batters with his fastball. He posted a sub-par 4.7% Swinging-Strike Percentage overall, with all of those swinging strikes coming on his fastball. Also, I believe almost all of those swinging strikes happened within the first three innings of the game.

In other words, Davis managed to fool the Yankee batters decently one time through the line-up, but as their line-up turned over for the second and third time, Davis didn't have the secondary pitches to continue to fool their hitters. He grew tired, lost velocity, started throwing more balls and falling behind in counts, and got hit hard. Pitching against C.C. Sabathia is never an easy assignment and given that he was facing the most loaded line-up in all of baseball, I'm okay with Davis' performance today. He should get better as the season goes along and regardless, he did shut down the Yankees for three innings; he must have good stuff to do that.

Here's a graph of Davis' performance broken down by pitch-type. As you can see, Davis had a tough time locating his change-up and slider, rarely getting those over for strikes even when he did throw them. With only his fastball and curveball reliably landing for strikes, the Yankees didn't have to guess too hard about what they were going to see: 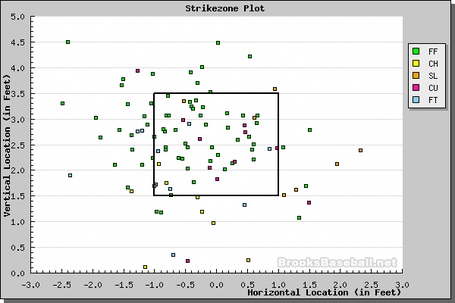 I have nothing to say about our offense today. I hate getting no-hit, even against a great pitcher like Sabathia.

Going into the series I figured this was the game the Rays had the worst chance of winning, so at least they won yesterday.  Tomorrow's match-up of Shields and Burnett should make for a good match-up, and it gives us a much better chance of winning than today.