We're six games into the season. There's 156 games to go. Just keep that in mind. There's no reason to go into panic mode just because the bullpen and offense didn't look so sharp the past two nights and the Yankees won the series.

I'm not going to dwell on this loss too much. The offense was lackluster, scoring just one run after the first inning. James Shields labored through 5.1 IP, throwing 103 pitches and allowing 2ER in the process. Not Shields' best start, but it certainly could have been worse. After Alex Rodriguez flew out to center field, Robinson Cano laced a double down the right field line. With Jorge Posada due up next Shields' day was done, and he was replaced by Randy Choate. Even though it was just the 6th inning, it was this at bat, and this decision, that changed the outcome of the game.

I don't understand it. I really don't. Why in the world would you bring in Randy Choate, a lefty specialist, to face switch-hitting Jorge Posada when Lance Cormier was also warm in the pen? It's not like Posada has a significant platoon split, his numbers are excellent from either side of the plate. I know that Curtis Granderson and his utter inability to hit lefties follows Posada in the batting order and having Choate face him would be ideal. But if you're behind by the time you get to Granderson the point is then moot. Choate had also thrown 24 pitches the night before, which is a lot for any LOOGY. Bringing in Cormier, and his ability to get out righties and lefties, in this situation would have been the correct play. Instead, Maddon decided to go with Choate, who on his second pitch served up a fastball in the middle of the plate which Posada promptly deposited it into the left field seats. That home run gave the Yankees a 3-2 lead and seemed to take the life out of the Rays. 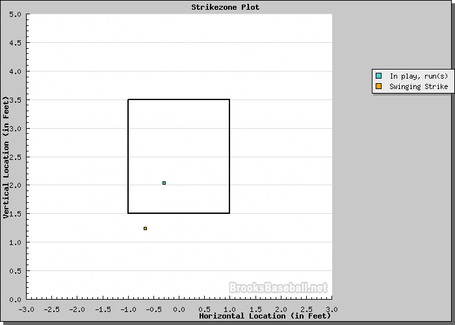 If Maddon has explained his reasoning behind this move then I've yet to hear it. I thoroughly enjoy having him as the manager of the Rays, but sometimes he makes decisions that baffle the mind while leaving the seemingly obvious move on the table.

-The Rays did put up a little bit of a fight in the bottom of the 6th, loading the bases while down just two runs. That brought B.J. Upton to the plate. After seeing A.J. Burnett walk Carlos Pena on five pitches you would think that a little bit of patience would be in order. Apparently B.J. didn't seeing as how he swung at the first pitch, popping it up to end the inning and effectively the game.

-Maddon's decision to bring in Choate was infuriating. Ben Zobrist bunting in the first inning was stupid. I don't care that he moved Carl Crawford over, or that Crawford would later score on a ground out by Pena. There were no outs. You're the number three hitter. You. Do. Not. Bunt. Giving away outs in the first inning of a game against the best team in baseball isn't the smartest strategy.