With two series down the lazy analyst can start to find data without having to set up his/her own database.  Joe Lefkowitz has been working hard and now has 2008 up to 4/8/10 in his easy to use database.  Since we're about to play the team from Bodymore, Murdaland again, I thought it would be interesting to take a look at how the top of the rotation pitched to the heart of our order last time around.  My initial goal was to see if there was anything obvious for why we weren't racking up walks from three of our best OBP guys.  We won't see Millwood this time around, but Bergesen will be following Guthrie and Matusz, whom we did face.  After the jump there will be pretty pictures, haphazard "analysis", and cake.  Warning there is no cake.

First up, lets take a look at the man who's been batting 3rd so far, Ben Zobrist: 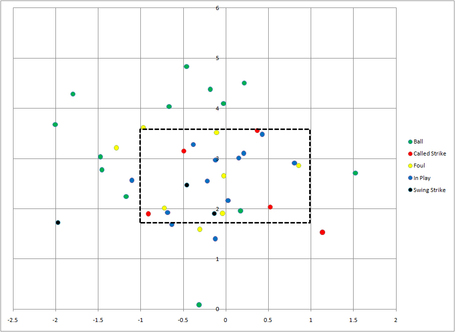 I think the legend makes it pretty clear what's going on.  Note that these are each to their own scale, thus they will not overlay.  Also, I went with best fit axes to eliminate dead space.  You can see that Zobrist only had 3 swing strikes, which is encouraging, with only one outside of the zone.  You can see one pretty bad called strike, but there's also a ball in there that should have gone the other way.  He seems to have pretty good plate coverage, though not breaking it down for the big switch hitter may provide deceiving results, as he put balls in play all across the zone.  He does a pretty good job of laying off the obvious balls, but will offer at those that are borderline.  Perhaps this is where he could steal an extra ball or two to work a walk.  Of course, that relies on whatever the umpire feels like calling, so perhaps Benny felt it was better to just take a whack.

Next up, let's take a look at Carlos Pena: 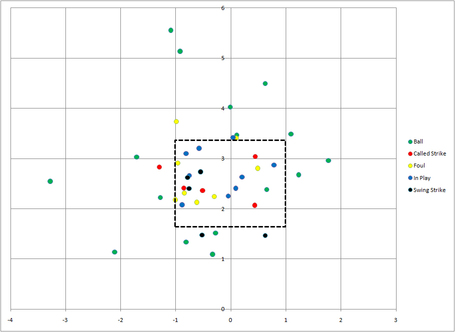 With Los only batting from one side of the plate, it gives us a better idea of how pitchers are trying to handle him.  The three clustered swing strikes away and the two below the zone may indicate an area that they are trying to pound, especially when you see the called strikes and foul balls near the cluster around (-1,2).  He's done a good job of hitting the balls that are left over the plate, but he also put in play a few that were away.  You don't see too many pitches to the inside, though I'd be willing to bet that Matusz was responsible for the ones you see.  If I were Los I'd be expecting a lot of pitches on the outer half.  I hope that early or ahead in the count he leaves them out there, hoping to punish something that ends up middle-in.

Lastly, Evan Longoria is up and Kid Dynomite might be the most selective of all three: 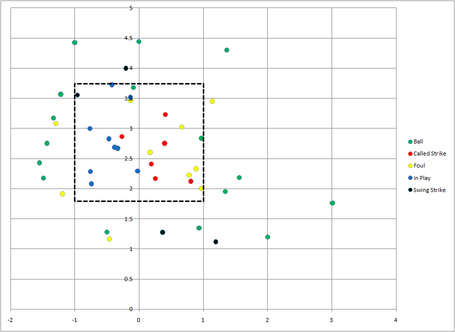 The first thing I notice is that they try to get him off the plate inside, I'm guessing gas, and then go low-and-away, I'm guessing breaking ball (by the way, I can look these up if anyone is genuinely curious, I'm just lazy right now).  I'd say his approach is to murder anything that's on the inner-half of the plate, preferably middle to low.  He's taken more strikes than the other two on some decent pitches, so he's most likely keyholing inside pitches until he's got two strikes.  Interesting to see all the foul balls on the outer half.  He tends to get pull-happy, and it's hard to argue with the results, but if he could start Navi'ing those over the infield in front of the right-fielder, it could help his batting average and on-base percentage, probably at the expense of his slugging percentage.  Not sure you want to mess with a good thing, but eventually pitchers will stop giving him anything that he can turn on, besides mistakes, and he's going to have to go out and get those.

Hopefully, we'll have some more data available soon to take a look at the Yankee series.  Let me know any questions, comments, concerns, etc.. below.