Matt Garza's night got off to a rocky start. By the second pitch of the night (a Felix Pie home run) he had allowed as many earned runs (1) as he did in eight innings last week. At the end of the third inning, Garza had allowed four hits and two walks. Things, however, would get better from there. And that solo home run would be the only run allowed by Garza on the evening.

The Orioles would not have another base runner until the seventh inning when Scott walked with one out. Garza ran into a little trouble in the that inning, however, stallionaire, Carl Crawford would make a diving play in left-center field that put a damper on the Orioles rally efforts; more on Crawford in a minute.

From there Garza cruised through the eighth inning - making a great grab at retire his final batter of the evening in Nick Markakis. He struck out five batters in this start compared to the nine of a week ago and only had seven swinging strikes; nonetheless, the results were similar. For the second straight game, Garza allowed just one earned run while going eight strong innings; the stuff of aces. You have to appreciate these efforts in which Garza gives the bullpen, and Joe Maddon, most of the night off.

Garza threw a fastball 70% of the time tonight, and had good control of the pitch to left-handers. The plan was to attack lefties on the outer half of the plate and as you can see...mission accomplished. 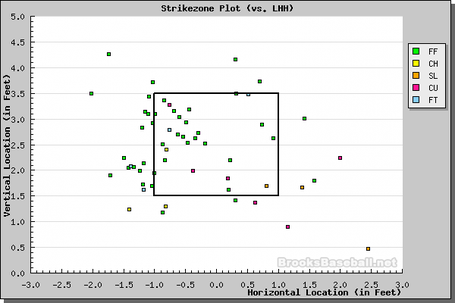 Garza was dealing tonight, but he had plenty of help on the evening from Carl Crawford. CC went 4-4 with a double, two singles, a towering home run, and the diving catch mentioned above. If Brian Peters is putting together a highlight reel for prospective bidders, he can just send them a DVD of this game.

Making only his second start of the season, DRB Prodigal son, Reid Brignac put the Rayson the board with a solo shot to right field. Maddon loves to play the hot hand, and with Sean Rodriguez off to a mediocre start, this could buy Brignac some more playing time.

It was nice to see the Rays put up some extra runs late in the game and Rafael Soriano being able to work an easy ninth inning, giving up a walk while showing off his nasty slider for two swinging strikeouts.

Winning feels so much better than losing.