Share All sharing options for: Quick Visuals: A Look at Evan Longoria's Sweetspot(s)

Does this get your attention? 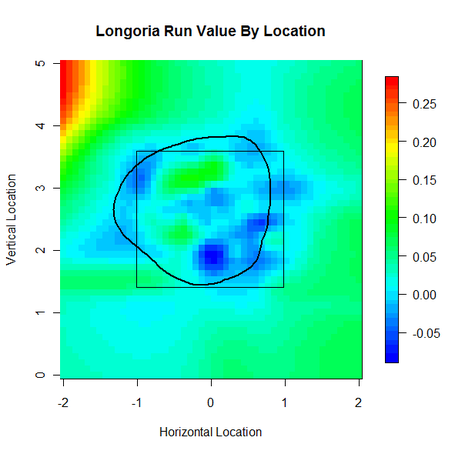 Yes, RZ has finally pulled through and brought DRaysBay its very first "heat map"! Taking a cue from Jeremy Greenhouse of Baseball Analysts, here is my own short version of a visual scouting report that JG has done here and here (this counts too). My first subject will be everyone's favorite 2010 AL MVP candidate, Evan Longoria.

Looking at that colorful first graph, the color bar shows that anything not dark blue is positive run value. Focusing on the inside the strike zone, there are two notable sweetspots that Longoria seems to possess. Up in the zone and over the middle part of the plate, and just a little in from the middle of strike zone. This seems right considering where his home runs have been located. 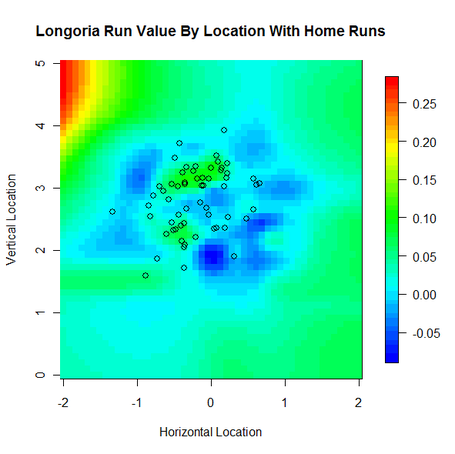 The majority his home runs are clustered almost perfectly in his two sweetspots. Beat the zone low and away and you should avoid the home run (sorry Longo).

I'm terrible, as some of you hawk eyes are wondering what that black circle was in the first graph. That is a contour line of his 50% swing rate meaning he swings at least half of the time at pitches inside that particular location. A little futher inside than what I expected but I assume that might be typical of most hitters with similar overall swing rates.

Although I am unable to produce the color coded charts for release points and movements as Greenhouse did, I will just settle for run value by initial pitch velocity. 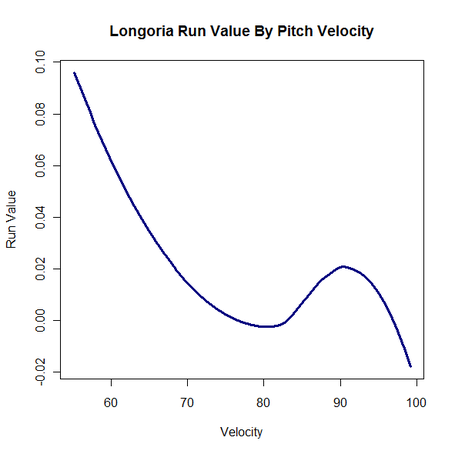 Longoria handles 90 mph pitches quite well in fact yet struggles somewhat with pitches between the mid-70s to mid-80s, which are most of the curves and changeups he sees. Although struggle is a strong word since the line barely gets into the negatives. Also note that I forgot to omit intentional balls, which constitute most of those sub 70 mph pitches.

Now moving away from the pitch f/x, I saw the conventional media recently compared Longoria to Orioles legend Cal Ripken Jr. and their similar statistics for their first two seasons in the Majors. No disrespect to Ripken, but somehow I don't feel comfortable with this comparison. 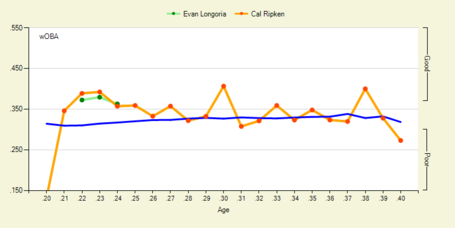 Ripken was average or slightly above average in wOBA for 17 of his 21 seasons played. But Ripken had his value in defense and EAA (extra attendance added). I'm sure Longoria can definitely outperform him in two of the three categories.