It's really too early to get into serious analysis, but I've feel like the same observation is being made by myself, other members of the DRaysBay community, talk radio, and even from Joe Maddon. That said, I think it's ok if we take a peak at the data.

Ben Zobrist is off to a fine start this season. It's early, but his slash line of .286/.342/.486 with a weighted on-base average (wOBA) of .363 seems like a pretty reasonable line to expect from Zorilla going forward. However, it's not the production that people are talking about with Zobrist, but the swinging.

The most casual observation of Zobrist so far is he is swinging at a number of pitches outside of his zone; something he didn't do that much of last season. I think we've all had this thought as we watched the first nine games.

That observation is correct according to early plate discipline data.

Currently, Zobrist is swinging at 31.2% of pitches outside of the zone. His career average is 20.5%. The league average so far is around 27%. Just remember that Zobrist has seen 152 pitches in 2010. He saw 2432 pitches last season. That should put the sample size in perspective, so take with a grain of salt.

Right as the season started, I said one of the early things to watch for was Ben Zobrist and the amount of fastballs thrown. As the story goes, Zobrist was a fastball killer last year and pitchers adjusted in mid-season - throwing more change-ups and breaking balls - before slacking off towards the end.

Of the 152 pitches Zobrist has seen in the first nine games, 58 % of them have been fastballs. For his career, he has seen 58% fastballs. Right now, pitchers are working Zobrist with sliders and change-ups and he's whiffing on quite a few of them. He has seen a combined 46 sliders and change-ups. He's swung at 24 of them and come up empty 11 times. Not surprisingly, most of these swings are coming low in the zone. 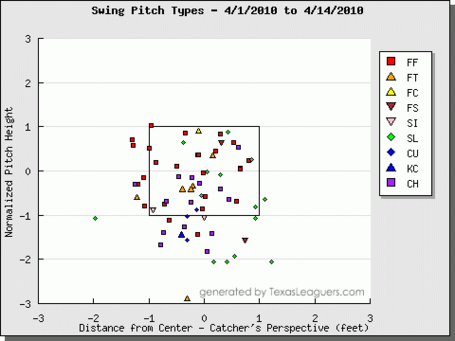 Sorry no fancy maps or graph, but hat tip to texasleaguers.com for the chart.

What does this tell us? Not much except Ben Zobrist is having some trouble timing up his swing on sliders and change-ups during the first week of the season. There is nothing to worry about at this minute as his career numbers suggest that patience will come. And after all, you know who is a call away. More than anything, I just wanted to do some quick fact checking during the off day on something I've observed during the games. In his case, the eyes and the data are telling us the same story.